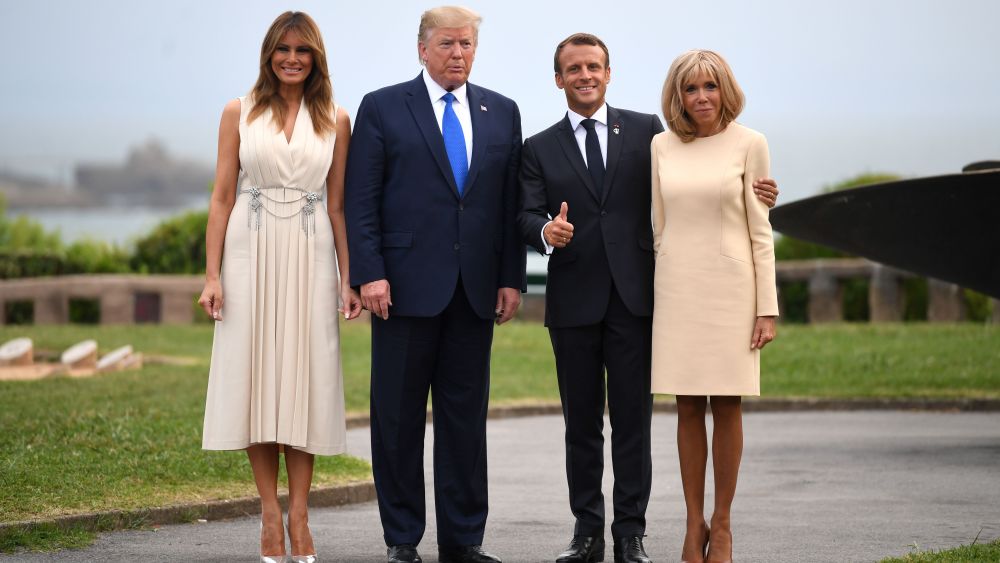 SUNNY SIDE UP: In light of the increasingly fractured and troubled state of geopolitics, key world leaders have countless conundrums to deal with at the G7 Summit in Biarritz. Trade, climate change, Middle East tensions, Iran’s seizure of foreign ships and wariness of a worldwide recession based on warning signs in Germany, the U.K. and the U.S. are among the many points of concern. While the powers that will be locked in meetings for much of the weekend, their respective better halves understand how their secondary roles can potentially offer some much needed levity.

Perhaps that’s the reason that First Lady Melania Trump exited Air Force One upon arriving in France, wearing a bright yellow and white Calvin Klein dress Saturday. The sleeveless style was a throwback look that had been designed by Raf Simons. Management at Calvin Klein’s parent company PVH parted ways with him at the end of last year but FLOTUS remains a fan. (Simons is back in his native Belgium designing his own collection and he collaborated with the outerwear label Templa.) Trump has worn his designs for Calvin Klein for other occasions such as an outing during last summer’s NATO’s Summit.

The First Lady also took something from her closet for Friday night’s departure, wearing a seasons old black and white tweed Chanel jacket that she paired with white jeans and Christian Louboutin flats. The quintessential casually chic French look is one that her stylist Herve Pierre knows well. The French born, New York City based Pierre is known to do his history homework in helping FLOTUS plan for official international tours of duty. He would know Chanel’s namesake Gabrielle Chanel had deep ties to Biarritz. She first visited the seaside resort in 1915 with Arthur “Boy” Capel, and was taken by its stylishness, due in large part to the affluent Parisian women who sought refuge there during the war. Chanel opened her first couture house in Biarritz that same year.

Located on the Cote Basque in the French department of the Pyrenees Atlantiques, the seaside resort was also popular with Spanish aristocrats and later Russian ones after the fall of the czar. This is FLOTUS’ first trip to the surfer happy beachfront. The G7’s base camp, the Hotel du Palais was originally built for another power couple. In 1854, Napoleon III hired Dagueret to design what would be a summer villa for Empress Eugenia. The Trumps were reconvening with the G7 host, French President Emmanuel Macron and his wife Brigitte over dinner Saturday night. FLOTUS wore a beige fitted Gucci dress with a rhinestone belt. The female part of the foursome share a love for fashion. But their political heavyweight husbands have other issues to brew over, namely France’s digital service tax that is taking a bite out of U.S. tech companies like Facebook, Amazon, Google and Microsoft.