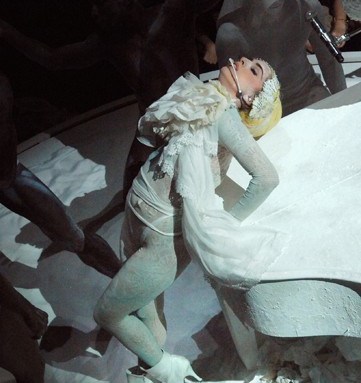 GAGA IN WHITE: Lady Gaga performed a three-song set to a packed party in Tokyo on Tuesday night at an event hosted by MAC Cosmetics to promote her new Viva Glam lip color shade to benefit the MAC AIDS Fund. Dressed head to toe in a white lace bodysuit, accented with white ankle boots and a yellow bouffant wig, Lady Gaga kept fans waiting for an hour and a half past her scheduled performance time, but eventually put on a typically theatrical show. Male dancers dressed in white briefs and smeared in white body paint accompanied the singer onstage as she sang “Speechless,” “Alejandro” and the crowd pleaser, “Bad Romance.” The rotating platform was covered in white snowlike powder, which the singer tossed into the audience as she executed her provocative dance moves. For the finale, the songstress donned neon tube lights and formed a crucifix with one of her whitewashed backup singers.

GREEN DAY: Designer Eviana Hartman, the brains behind eco-friendly label and Ecco Domani winner Bodkin, has signed on to design a recurring capsule collection for German-based clothing company Hessnatur. It’s the second designer collection for the company, which also launched Miguel Adrover’s lineup for fall 2008. Comprising about 10 pieces in neutral shades such as black, gray and taupe, Hartman’s fall collection is a mix of mostly knitwear pieces, from tunics and sweaters to leggings and trousers, plus one cool boiled-wool motorcycle coat. “The goal was really just to make modular, layerable, neutral, ageless basics that combine pajamalike comfort with a chic appearance,” explained Hartman, who is at work on spring 2011 for the company now. Hessnatur, known in Europe for its use of 100 percent natural fibers, is making a play for greater coverage in the U.S. While Hartman’s line will be sold in the company’s retail stores and online in Europe, it also will be available to U.S. consumers online, with retail prices ranging from $248 for the coat to $75 for a pair of cotton patched leggings. Hartman will continue to design and produce Bodkin, but she said the Hessnatur collaboration had illuminated the benefits of working for a large company on sustainable designs. “Having only a two-person company really limits the scope of what you can do in terms of creating new supply chains,” she said.

ALL ABOUT THE EARTH: Count Derek Lam among the many members of the fashion flock doing his part to help the environment. “I quit smoking in late February,” the designer said. “I don’t know if that’s ‘green’ exactly, but it was the last of many attempts to quit.” (Lam also mentioned that he would one day like to incorporate some eco-friendly fabrics into his collection.) Two days before the 40th anniversary of Earth Day, Lam cohosted a lunch with Amanda Brooks at BG restaurant in Bergdorf Goodman to celebrate Tod’s “Icons by an Icon” photo exhibit. The images, on display in the store’s shoe salon, feature black-and-white photos of stylish ladies, including Brooks and Anh Duong, wearing the brand’s trademark driving moccasin. Veteran photographer Elliott Erwitt shot the images (hence the title “Icons by an Icon”). Erwitt, Duong, Cynthia Rowley and Celerie Kemble joined Lam and Brooks at the event.

“Are you happy with the photos?” Duong asked the photog.

DAYBED OF THE DEAD: Lest anyone wonder where Rick Owens sleeps — leather sheets, perhaps? — they can get an idea of what’s behind the Gothic designer’s bedroom doors at his first U.S. furniture exhibition. Entitled “Pavane for a Dead Princess,” after French composer Maurice Ravel’s 1899 piano solo, the show opens May 8 at Salon 94 in New York. And, according to a press release, Owens will “transform the gallery into a contemporary sleeping quarter based in part on his own Parisian home.” The furnishings include a low bed and curvilinear headboard cut from Spanish alabaster, and a daybed made of wood, bronze and alabaster. For added Owensian flourish, a floor-to-ceiling sheared mink curtain will enclose the space with a stylish, au sauvage touch.

MARKET FORCES: It turns out emerging markets are just as much of a draw in the art world as in the financial spheres. On Monday, Phillips de Pury & Co. held a preview of its sale of contemporary art from emerging markets, entitled “BRIC: Brazil, Russia, India and China,” at London’s Saatchi Gallery. Simon de Pury, chairman of Phillips de Pury, said he had been prompted to put on the sale, as “the financial papers are reporting on a daily basis what’s happening in Brazil, Russia, India and China,” adding he wanted to highlight those countries’ “very interesting contemporary art scenes.” The works in the sale, which are estimated to fetch a total of between 7.8 million pounds and 11 million pounds, or $11.9 million and $16.8 million at current exchange, are on view at the gallery this week before they’re auctioned on April 23 and 24. Meanwhile, Phillips de Pury is already plotting its next sale. As part of its Contemporary Art sale in New York May 13 and 14, the house will auction technology entrepreneur Halsey Minor’s contemporary art collection, which includes the Richard Prince painting “Nurse in Hollywood #4.”

SHOPGIRL: As if Chanel Iman didn’t already have the most coveted designer duds at her disposal. Now that her mother, China Robinson, has opened a clothing shop called the Red Bag Boutique in Culver City, Calif., the young model can get her pick of the latest contemporary fashion. “Everything I’m wearing is from my mom’s store,” said Iman, epitomizing boho sassy chic in a sheer white vest festooned with beads, ultrashort denim cutoffs and embellished stiletto sandals at Armani Exchange’s carnival-themed party on Saturday in Thermal, Calif. Although she said she has no intention of designing clothes, all those hours collaborating with designers will come in handy when she helps style the clothes and assist shoppers at the store. Talk about a model daughter.