The French retailer staged a street parade of Jedi and Stormtroopers to mark its "cosmic" Christmas theme. 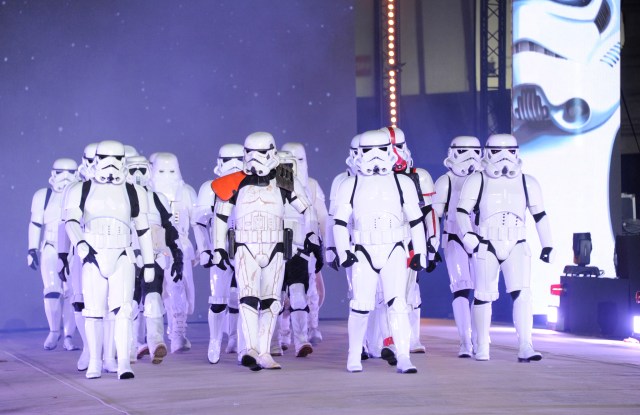 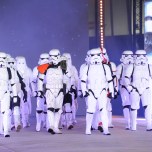 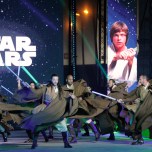 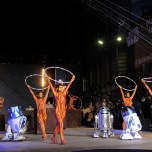 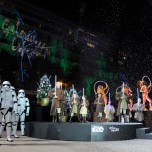 USE THE FORCE: The Force was with Galeries Lafayette on Wednesday as the French department store celebrated the unveiling of its cosmic Christmas window displays with a “Star Wars”-themed outdoor show in front of its Paris flagship.

The retailer took over the street behind the Paris Opera, where it has in the past staged what it billed as the world’s biggest catwalk show, and turned it over to a parade of Jedi, Stormtroopers and robots.

Giant screens broadcast the live action, in addition to the trailer for “Star Wars: The Force Awakens,” set for release on Dec. 18.

The display marked a partnership between Galeries Lafayette and the Walt Disney Co., which owns the “Star Wars” franchise since it acquired Lucasfilm in 2012. The partnership includes the opening of a 4,000-square-foot Disney Store shop-in-shop at the Boulevard Haussmann unit in Paris, in addition to smaller corners at Galeries Lafayette department stores in Nice and Nantes. Further stores could follow in other locations.

“It is part of the DNA of the Galeries Lafayette brand to go from accessible to premium,” said Nicolas Houzé, chief executive officer of Galeries Lafayette and BHV Marais. “Disney is a natural partnership for us, just as Dior, Vuitton or Gucci are in the luxury universe.”

After the display, guests repaired to the fourth-floor Disney Store, which offered “Star Wars” merchandise including light sabers retailing for 34.90 euros, or $38.35 at current exchange, and Princess Leia costumes priced 49.90 euros, or $54.85.

The shop-in-shop also carries a capsule collection of clothes designed in collaboration with students at the Institut Français de la Mode fashion school.

In addition, the walkway between the main Galeries Lafayette building and the neighboring Lafayette Homme store will house an exhibition of Stormtrooper helmets customized by French artists until Jan. 4. From Dec. 5, the windows of Lafayette Homme will be dedicated to the new “Star Wars” movie.

For its main store windows, Galeries Lafayette conjured an intergalactic universe around a robot called Léon and his family. The giant Christmas tree under its famed cupola is made of gold and silver spheres meant to evoke meteorites.