STRAWBERRY FIELDS: As part of a citywide initiative to promote urban farming in Paris, Galeries Lafayette on Monday night unveiled a hanging garden on the rooftop of its Boulevard Haussmann flagship that features 150 varieties of plants.

Guests plucked ripe strawberries from panels made of hemp and wool spread out over 5,400 square feet, part of a soilless cultivation system installed in March that does not use any chemicals and recycles all its water use.

“I am stuffed with strawberries — they are absolutely delicious,” Jean-Louis Missika, deputy mayor of Paris in charge of town planning, architecture and economic development, told a crowd including Philippe Houzé, executive chairman of Galeries Lafayette Group, and Nicolas Houzé, chief executive officer of its department store division.

He noted that close to 900 pounds of strawberries have already been collected on site. “This really is not small-scale production, and when people tell me that urban farming is a gimmick for bobos, it makes me really mad, because I think that is not at all the case,” Missika said.

The project, the first of its kind in the French capital, is the brainchild of the French Association of Soilless Cultivation and will remain in place until October 2016. The fruit, edible flowers and herbs grown on site will be distributed to chefs who are partners of the initiative, dubbed “Paris sous les fraises” (or Paris under strawberries, in English).

Agnès Vigneron, director of Galeries Lafayette Haussmann, noted the retailer had to overcome “numerous technical, financial and legal hurdles” to create what she described as one of the largest vegetalized terraces in the world.

Pénélope Komitès, deputy mayor of Paris in charge of green spaces, nature and biodiversity, said similar projects were in the works elsewhere in the capital. “I am really convinced that we are working today on the development of a genuine economic activity,” she said. “By 2020, we will have some 30 hectares of production of fruit and vegetables on Paris soil.” 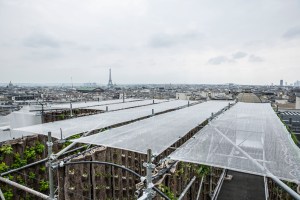