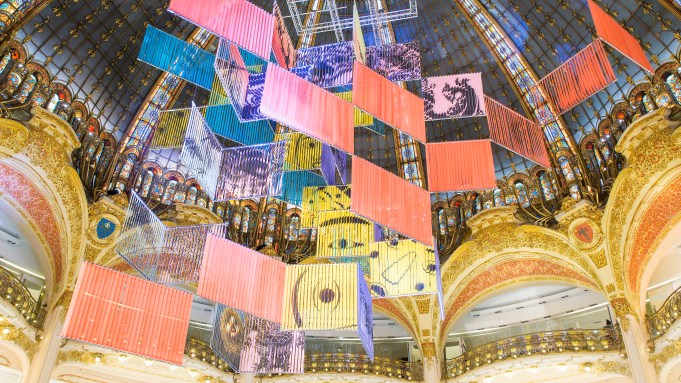 PICK AND MIX: As part of its ongoing commitment to supporting contemporary art, Galeries Lafayette has tapped South Korean artist Haegue Yang to create original artworks for its department store chain across France.

Yang took over the windows, atrium and floor displays of the retailer’s Boulevard Haussmann flagship in Paris with her “Quasi-Pagan Modern” exhibition, set to run until Oct. 9, as well as 400 windows in the rest of the country. She has also designed a limited-edition carrier bag for the store.

The artist, who is known for using Venetian blinds, was fresh off showing the monumental artwork “Lingering Nous” at the Centre Pompidou in Paris. Yang, who lives and works in Berlin and Seoul, professed mixed feelings about the French capital.

“Honestly, Paris is not my favorite city. It’s too claustrophobic, but I like the job here. There is an idea of the cultural history that really challenges me as someone who is not European. It’s actually a nice challenge to deal with the history,” she said.

Yang said Galeries Lafayette, which is building a home in the Marais district for its art foundation, gave her total freedom. Her collage-style images blend elements like beehives, traditional Korean masks and mundane objects like circular blades and batteries.

“I barely do public commissions, I barely do collaborations with the commercial sector, but I thought this time, ‘Ah, I’ve reached the point where this exhibition business has become another routine.’ I need something to prove myself that I’m genuinely willing to communicate with the people,” she explained.

“I hope they could hire me again at some point. I want to do it again,” she added with a laugh.

The collaboration was unveiled on Tuesday evening at a cocktail on the rooftop of Boulevard Haussmann store, which offers stunning views of the Paris skyline. Guests were joined by the store’s top executives: executive chairman Philippe Houzé and his sons Nicolas Houzé, chief executive officer of Galeries Lafayette Group’s department-store division, and Guillaume Houzé, its director of patronage and image.

Guillaume Houzé said the Galeries Lafayette Foundation headquarters, designed by Rem Koolhaas, would open to the public at the end of 2017, a year later than initially scheduled, though he noted the delay was not unusual.

Houzé is a descendant of the store’s founder and, together with his grandmother, Ginette Moulin, has established a large private collection from which items are regularly displayed at the Galerie des Galeries, an exhibition space inside the Boulevard Haussmann store.