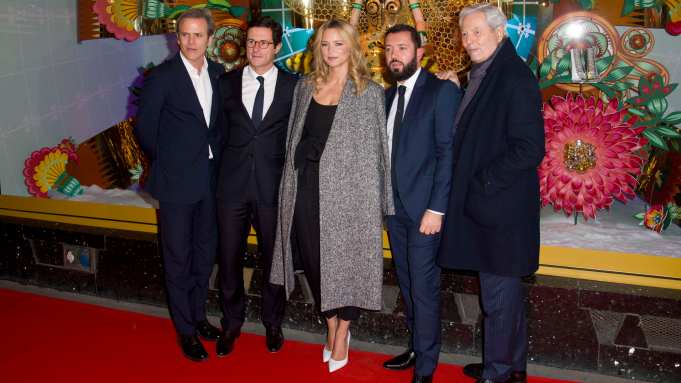 “It’s an important moment for department stores,” said Alexandre Liot, director of the flagship, speaking to a crowd that had gathered on an upper floor perch in the store. Suspended under the historic cupola, the towering tree was covered with huge flower ornaments and topped with a queen bee whose wings moved — the season’s theme was a beehive.

“This is a very big responsibility,” said Efira before the countdown ensued. Five, four, three, two, one, zero: out came tinkling music, clock chimes and lights, and giant bees began moving up and down, past the floors of shoppers.

The rise of digital commerce has pushed retailers further into the entertainment realm, in search of new ways to draw shoppers away from screens and into stores. The Haussmann store has held dozens of events over the past year, Liot explained after the ceremony. For its Christmas theme, it added an ecological flavor, teaming with the Fondation de France’s virtual “bee influencer,” for a campaign to raise the profile of bees.

“We do a lot of events in the store, we did quite a few under the cupola this year — our teams have been doubling down on their inventiveness in order to surprise our clients,” he said.

“I was in the best spot,” recalled Efira after the event. Earlier, she had posed on the street in front of displays of animated bee puppets flapping over piles of merchandise. She wore a chic black Stella McCartney jumpsuit with white heels and was flanked by executives from the family-owned department store group: Liot, chief operating officer Olivier Bron, communications and image director Guillaume Houzé and chairman Philippe Houzé.

“I’ve seen the Galeries Lafayette windows before but usually I’m positioned behind several rows of people,” she added.

When it comes to decorating for the holidays at home, the cinema star said she does her best.

“I had a mother who was exceedingly good at it, and I try to emulate her, but I don’t really manage so well,” she said ruefully.

“It’s a bit minimalist compared to Galeries Lafayette,” she added, with a grin.

Efira has three movies coming out next year. In a film directed by Anne Fontaine, she portrays a policewoman charged with escorting an immigrant to the border who “doesn’t do what she’s asked to.” For Paul Verhoeven’s interpretation of Benedetta Carlini, she plays a lesbian nun from the Middle Ages. And for an Albert Dupontel-directed film, her character is facing death and embarks on a madcap adventure.