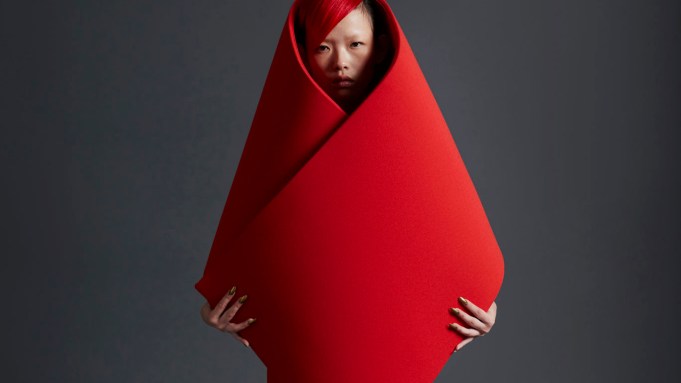 HIGH ANXIETY: Gareth Pugh eschewed a show this season in favor of a film, directed by Nick Knight and screened at Imax in London.

The exacting photographer reckons that medium is the future.

“I don’t think the catwalk system is sustainable. It’s too expensive, and happens too frequently,” he said. “The internet has changed everything. You can’t just keep flying people around the world, from one venue to another just to get them to see your show.I think all the designers are frustrated by that, and I think all of the possibilities that film allows are really, really exciting to a designer.”
Knight suggested film “feels more forward-looking.

“Behind all of the collections from all the great designers there is an emotion and a message, and Gareth wanted to make an emotional film,” he said.
“I didn’t want to make a fashion film; I wanted to make something that went a lot deeper,” Pugh agreed.

In fact, the opening scenes were more akin to the horror genre than the slick and stylized visuals the audience was expecting. The film opens with two besuited men, the designer was one of them, disfiguring each other’s faces and bodies with mud and paint. The violent and perverse scene ends with Pugh naked and splayed on a table, covered in mud, the other man literally ripping apart his clay body.

The film progresses through scenes of dancers, choreographed by Wayne McGregor: a figure spinning in a dramatically high-collared coat, and eye-less models in metal gowns. The palette moves through grays to black, red, gold and white as the film lightens in mood.

There were only flashes of the spring 2018 collection. Pugh released images afterward and will take appointments in Paris – putting the focus instead on the feelings behind the clothes.

“It’s about reconnecting with the reasons that make you want to get up in the morning and do something, the fire and passion in life,”explained Pugh, who wed Carson McColl immediately after the screening.