By Rosemary Feitelberg on May 2, 2016
View Slideshow 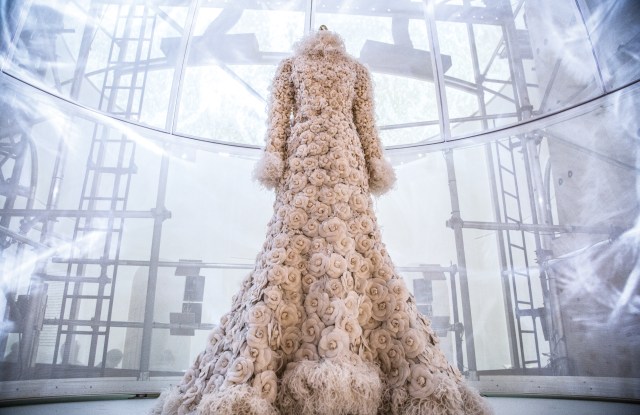 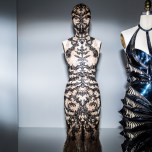 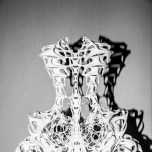 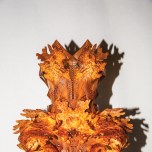 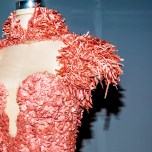 NEW YORK — Monday morning’s introductory remarks regarding “Manus x Machina: Fashion in the Age of Technology” wound up being delivered to a standing-room-only media crowd at the Metropolitan Museum of Art. Before The Costume Institute’s curator in charge Andrew Bolton took to the podium, many looped through both floors of the Robert Lehman Gallery to see the 170 ensembles that will be open to the public starting Thursday.

Designers know all too well the upsides and downsides of the man-made and the machine-made, but that didn’t inhibit Gareth Pugh, Noa Raviv, Thom Browne and Mary McFadden were among the designers making the rounds.

Standing beside a little black dress made entirely of drinking straws, Pugh said the style was originally designed for dancers in a performance for London-based choreographer Wayne McGregor, who does a lot of work with the Royal Opera House. Pugh’s idea was that the garment had its own movement and choreography. He said of his design, “It’s a huge honor for them to be here, but it’s kind of surreal because I know where they came from.”

He has taken to the stage in the past and will do so again. Last year Pugh, along with Prada and Alexander McQueen, were among the fashion houses to be selected by AnOther magazine to create films blending fashion and dance. This fall Pugh will whip up costumes for the Paris Opera’s “Eliogabalo” that Thomas Jolly is directing. With the opera opening on Sept. 16, and Pugh’s show slated for Sept. 17, he is already gearing himself up. Monday morning provided an interlude. Pugh said of “Manus x Machina: “It’s very cerebral and very serene. Andrew’s done a great job again — what more can I say?”

Jonathan Ive, chief design officer for Apple, the exhibition’s sponsor, seconded that in addressing the crowd. What particularly intrigued him about the prospect of the exhibition was that it would stimulate a conversation “exploring the relationship between what is made by hand and what is made by machine, that it would challenge the preconception held by some that the former somehow is inherently more valuable than the latter,” he said.

The son of a craftsman, Ive said he was raised with the fundamental belief that it is only when you personally work with material in your hands that you come to understand its true nature, characteristics, attributes and ultimately its potential. Guests looking for insight into Apple, and perhaps their own incentives, may have mulled over something Ive said, “Our goal has always been to create objects that are as beautiful as they are functional, as elegant as they are useful. Our physical designs are informed by our passions for materials and processes based on an experience we have gained by making things actually ourselves. Surprisingly fewer and fewer designers regardless of their design discipline seem to be interested in the detail of how something is actually made.”

After explaining the nuts and bolts of the exhibition, Bolton was greeted by a stream of well-wishers. The Met’s Thomas Campbell and Susan Sellers were on hand, as was OMA’s Shohei Shigematsu, who designed the show’s ethereal space. With tonight’s gala nearing, many beelined it for the door, while a few ducked back into the galleries for another lap.