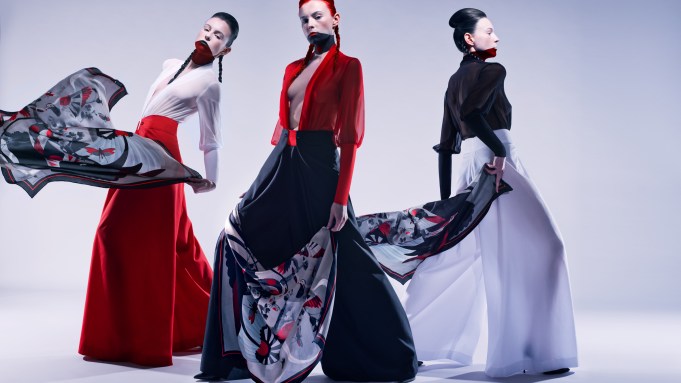 LONDON — Gary James McQueen, the nephew of the late Lee McQueen, is launching his own label with a range of made-to-order silk printed scarves.

His inaugural collection pays tribute to his uncle’s legacy and draws from his experiences working at McQueen’s design studio and being mentored by him.

“Everybody who worked with Lee knew that the most important part of the design process is the research, the development of an idea and thinking outside the box. That became very much part of my process, developing an idea and having a strong story behind the concept,” said the designer.

He grouped the prints he created into three categories: life, death and rebirth, offering his take on Alexander McQueen’s heritage. In the “Life” section he references Lee’s love of birds and eastern arts with a modernist print that combines imagery of birds and Japanese-inspired motifs and colors. The “Death” section is a nod to the Victorian era and its impact on endangered species such as the Ivory, while the prints in the “Rebirth” section channel a dark yet hopeful message through images of other-worldly female figures.

McQueen, who has a background in graphic design, creates the prints using 3-D technology. “I’m very much a child of the digital age,” he said. “With new technologies coming out like 3-D printing, there’s more options to use different services and they allow more freedom to create things. If you sketch things and draw things, you have to shade them, while in a 3D environment, you’ve got the lighting and the shading done for you so you can really sculpt the work.”

Despite inevitable comparisons between his and his late uncle’s works, McQueen said that he doesn’t feel any added pressures as he prepares for his label’s launch; “Similar to Lee you can see the theatricality and storytelling in my work. It’s something that I also love doing, so it drives me forward instead of adding pressure.”

He added that he sees scarves as the best and most cost-effective canvas to showcase his artworks and as the label develops he will look into adding more accessories to his offer.

“I wanted to create a bespoke, luxurious product that is designed by machine yet it’s hand-stitched and takes longer to be put together, almost like an artwork. That’s the approach I chose to take,” said McQueen, adding that he plans to launch his collection with a talk and presentation at the British Style Collective in Liverpool’s City Hall.

He is also in talks with Savile Row’s Anderson and Sheppard for the brand’s first retail partnership. “The heritage of the store suits my collection. I want to keep distribution exclusive and adopt a bespoke, unique approach.”