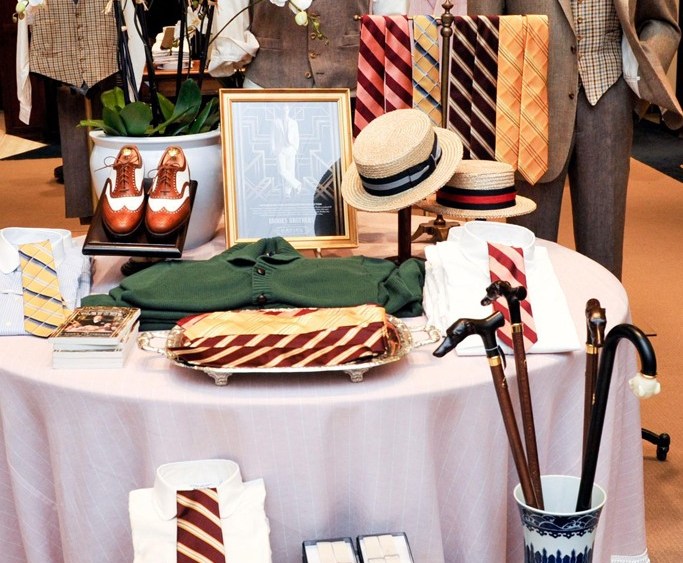 GATSBY STYLE: F. Scott Fitzgerald was a fan of Brooks Brothers — he mentioned the brand in his books “Tender is the Night” and “The Great Gatsby.” So when Catherine Martin, costume designer for Baz Luhrmann’s film interpretation of the classic Jazz Age novel was searching for inspiration for the wardrobe, her first phone call was to the iconic brand.

“I wanted to work with Brooks Brothers, particularly for the background players and the eveningwear,” Martin said at an event Thursday evening at the company’s Manhattan flagship to celebrate the collaboration and create buzz for the film, which will be released May 10. But as the process went on, Martin decided to expand her reach from black tie to daywear, first for the background players and then the main cast, including Leonardo DiCaprio, who plays Jay Gatsby. “It was a gradual evolution.”

That led to the creation of a commercial limited-edition capsule, The Gatsby Collection, that just hit Brooks Brothers stores and online. “The merchandise is selling very well,” said Claudio Del Vecchio, chief executive officer of Brooks. “Much more than we expected.” Top sellers so far include a black bowtie with white tipping — a Brooks Brothers archival piece that Martin discovered and brought to the retailer; it’s also the tie worn by DiCaprio in the poster of the film; a bottle green cotton cardigan with burgundy and white trim, and a white linen herringbone peak-lapel suit with a contrasting brown vest.

In addition to the commercial collection, Brooks Brothers has installed Gatsby-themed windows around the world and is showcasing some of the 1,700 items it produced for the film inside its flagships in New York, Beverly Hills, Milan, Tokyo, London and Hong Kong.