Isabelle Adjani and Marina Hands attended a presentation in Paris. 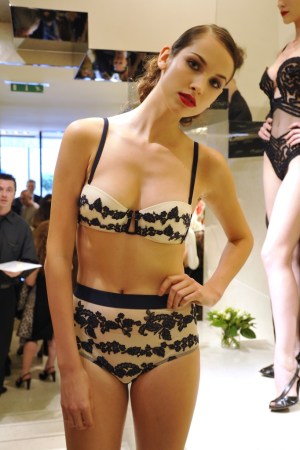 UNDERCOVER ANGELS: Just two days after Jean Paul Gaultier’s couture show in Paris, the designer unveiled his third collection for Italy’s La Perla. The high-end lingerie brand staged a presentation in its boutique on the Rue du Faubourg Saint-Honoré on Friday. Models wearing pieces from the spring 2013 collection, including a set with the designer’s cherished sailor-stripe motif, wandered among the guests.

Isabelle Adjani, a self-proclaimed fan of Gaultier, said she could not attend his high fashion show. But the actress just strutted down the catwalk, appearing as the final look of Swiss designer Jean-Luc Amsler’s show during Paris Couture Week.

This story first appeared in the July 10, 2012 issue of WWD. Subscribe Today.

“It is amusing. It s a little ‘exotic’ for an actress to play a model,” she mused.

Speaking of exoticism, Adjani has just finished a Bollywood movie, and has learned traditional Indian dances for the final wedding scene.

She recalled treating herself with a set from La Perla when she received her first significant fee as an actress.

The capsule collection for spring spans around 30 styles, including beachwear such as a striking “cage bustier” bathing suit and another printed with tattoos.

The collection is due to hit stores in November. The collaboration started in 2010.

“We felt that Jean Paul Gaultier was very relevant with our consumers,” La Perla chief executive officer Tim Brasher explained. “Jean Paul Gaultier is a name known around the world, so it is helpful. The collection does well in Europe, the U.S., Asia,” he added.

The previous Collection Createur for spring 2012 was sold in 139 boutiques.

The collaboration is getting some extra exposure as Madonna wears a leather nude and black bra from the previous Collection Createur on her new tour.