Calza is known for his fun fashion creations, Kawaii-themed references and pop-tinged collaborations, often with Japanese brands, companies and anime franchises. In the past, he has channeled his creativity in capsules with “Jurassic Park,” Hello Kitty, Tom and Jerry and Nintendo Switch’s “Animal Crossing: New Horizons,” among others.

The sneakers, developed in collaboration with Mizuno, reference the Japanese company’s Wave Prophecy style that has epitomized the company’s race toward technical innovation and performance since it was first introduced in 1997. It features a wavy midsole running from the heel to the forefoot that secures high running performance and extra cushioning, while providing fashion and street cred.

“I got my very first pair of Mizuno sneakers while I was visiting Japan, whilst studying abroad in China. It was love at first sight,” Calza said.

The sneakers are crafted from a GCDS Wear-logoed white mesh contrasting with the fuchsia-tinged heel rendered in a combination of suede and metallic pebax. Colorful laces and a logoed tongue complete the shoes, which come in a fuchsia box embellished with emoji-style cherries, which also contains branded stickers. 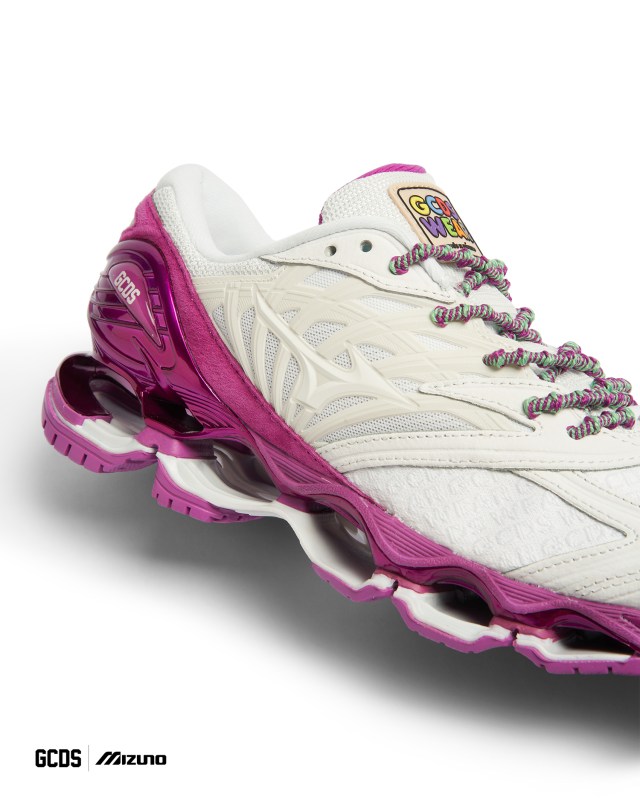 “The cherry represents blossom season in Japan, which is when the shoe is launching. Using GCDS’ staple color fuchsia, I decided to give it a metallic appeal because it reminded me of Japan’s aesthetic and futuristic charm, in sync with the technology of the Wave Prophecy [style] when it was first launched,” Calza explained.

Retailing at 265 euros, the shoes drop exclusively on Thursday on the GCDS e-commerce site before a global rollout planned for April 30 at select retailers.

GCDS was founded in 2015 by brothers Giuliano and Giordano Calza, the latter serving as the brand’s chief executive officer. In 2020, the Made in Italy Fund, managed by Pambianco and Quadrivio, acquired an undisclosed majority interest in the company and, according to the GCDS CEO, the fund will be pivotal to expand the label’s reach to new markets and in developing existing categories while continuing to bank on the backbone of Made in Italy, fun fashion creations and tongue-in-cheek communication.