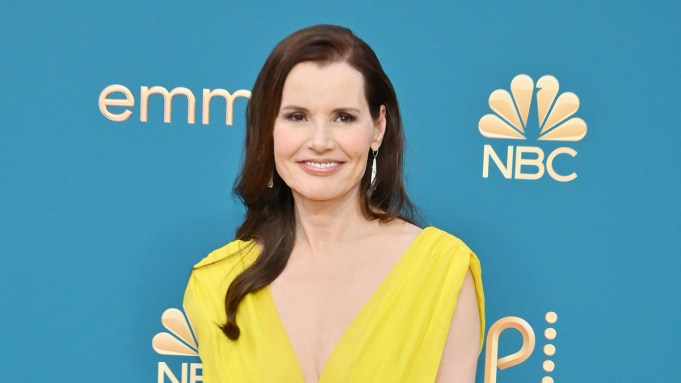 Geena Davis looked to bright hues for the 74th annual Emmy Awards on Monday in Los Angeles. The actress was the recipient of the Governors Award for her work as founder of The Geena Davis Institute on Gender in Media.

Davis attended the show wearing a yellow floor-length dress by Rani Zakhem that featured a crystal-embellished belt and pleated finish.

She was styled by Linda Medvene, who has worked with Angelina Jolie, Sterling K. Brown, Sloane Stephens, Helen Hunt and Janel Parrish.

Davis won an Emmy in 2006 in the category Outstanding Lead Actress in a Drama Series for her role as Mackenzie Allen in ABC’s “Commander in Chief.”

The veteran actress has worn a range of standout and elegant styles throughout her career on the red carpet. At the 2018 Screen Actors Guild Awards, she arrived in a strapless black dress that included an embossed paisley pattern, floral embellishments and tulle detail.