In the first of a series of collaborations with contemporary artists, Gen Art is printing Jacqueline Levine’s playful symbols on easy-to-wear separates backed by denim. 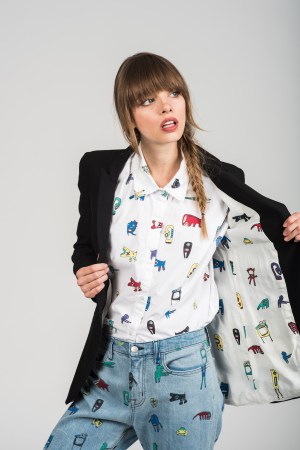 Under Armour to Reduce Size of Global Headquarters by 40 Percent

Gen Art is evolving from a supporter of emerging fashion talent to a designer of its own women’s clothing line.

For the fall season, the New York-based organization is offering its first in-house label, called Openhouse, inspired by the designers and artists it has highlighted over its 20-year history. Working with the concept of seasonal collaborations, Gen Art is tapping contemporary artists across the U.S. to create images that it will reproduce on shirtdresses, long button-downs, T-shirts, athletic clothing, washed denim jackets, boyfriend jeans and structured blazers with open backs. Riffing on the trend for nostalgia, the collection incorporates fabrics and patterns such as hunter plaid, bull denim and Nineties-era Olympic taffeta.

Retailing for between $100 and $300, Openhouse is making its retail premiere at Bauhaus in Hong Kong. It’s the first attempt at launching a consumer product by Gen Art, which promotes up-and-coming talent in fashion, art and film in competitions like the Gen Art Fresh Faces in Fashion. Some notable designers and brands that have been recognized as Fresh Faces in their early years were Zac Posen, Rebecca Taylor, Phillip Lim, Duckie Brown and Rodarte.

In Openhouse’s inaugural collection, the featured artist is Jacqueline Levine, who draws playful characters that resemble hybrids of cartoons and primitive symbols. Her work represents “the uniqueness in us all and a celebration of the individual,” Gen Art said.