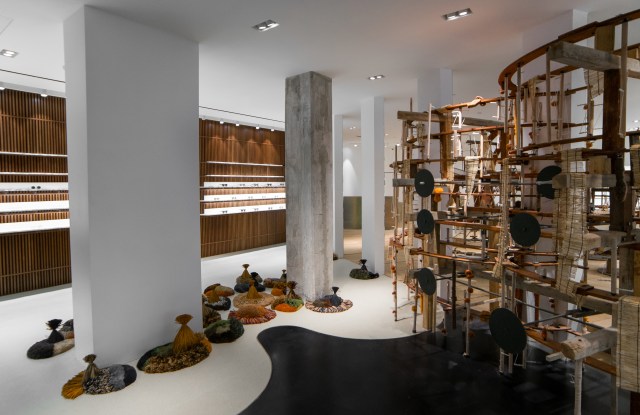 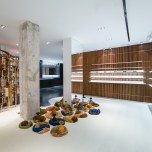 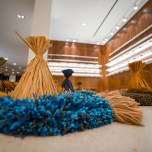 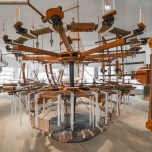 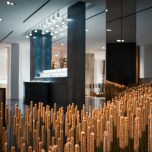 Korean eyewear brand Gentle Monster will open its second U.S. location and first West Coast store in downtown Los Angeles on Oct. 5 in an impressive new space that embodies the “high-end experimentation” and disruption the brand has become known for with its product, space, styling, culture redesign and technology.

The 4,800-square-foot museum-like space at 816 S. Broadway will include kinetic sculpture and interior installations by Floria Sigisomondi, and the opening night party will feature a performance by Viktorija Modesta.

The Los Angeles store experience was inspired by traditional methods of harvesting, as the stretched path inside guides visitors through a journey reimagining the process of harvesting, drying and threshing ripened rice crops. The space was designed to touch on ideas associated with the season, and fall being the time of harvest.

Scarecrows greet visitors high on top of terraced “fields,” where mother-of-pearl finishes add a layer of Eastern ambience. Nearly 2,000 metallic rods, symbolizing rice, stand just behind the inner entrance. The twigs left after the harvest are represented by rugs designed by knitting designer Misu A Barbe. An installation by artist Jung Uk Yang at the far back of the space represents the final step in harvesting rice: threshing.

Downtown Los Angeles’ Broadway district, where old Hollywood built its grand theaters, and adjacent to the Fashion District, is undergoing a revitalization thanks to the opening of hotels such as the Ace, Freehand and Nomad.

In addition to its New York flagship in SoHo, Gentle Monster, which was founded in Seoul in 2011, has 12 stores located in Seoul and Daegu, South Korea; China; and Hong Kong. The brand has collaborated with several notable designers and personalities including Tilda Swinton, Opening Ceremony, Tome and Hood by Air.

To read more about the Tilda Swinton collaboration, click here.