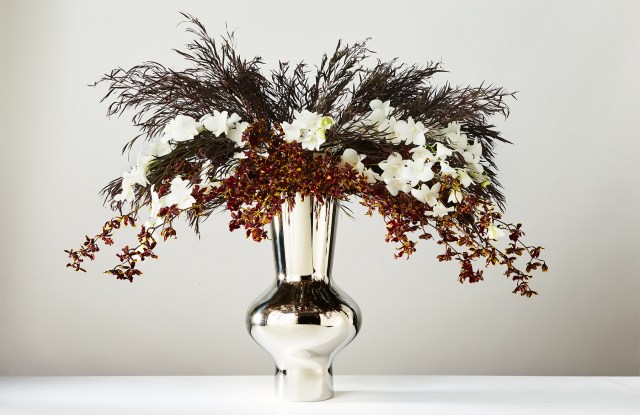 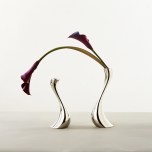 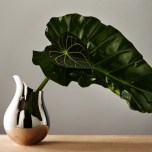 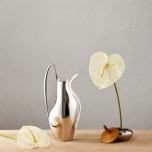 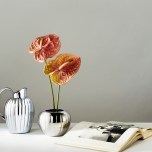 Georg Jensen has teamed with florist Marisa Competello of Meta Flora on a creative promotional campaign.

The Danish silversmith label enlisted Competello — whose sculptural, Ikebana-influenced arrangements are in demand by Nike, Kelly Wearstler and Rachel Comey – to create visually arresting displays all nested inside George Jensen designs. The images are to be shared on the brand’s social media feeds — spurring a new model of promotion, where dollars once spent on ad placements can now be allocated to commissioning creative, self-issued work.

Said Meeling Wong, president of Georg Jensen North America: “The collaborative project with Marisa was inspired by a photo taken in the Sixties of designer Arne Jacobsen’s summer house in Denmark. He was an early collaborator of Georg Jensen. Staying true to our Scandinavian minimalism, we worked with Marisa to create floral arrangements that worked in union with our iconic home products. The Georg Jensen DNA was built on collaborations with artists and designers. We’re so pleased to have worked with Marisa on these images as she is in a sense a floral artist.”

Said Competello of the Georg Jensen tie-up: “My aesthetic is generally more minimal and clean so it was fun to play with the shapes of the candle sticks with black lilies curved over them. I always liked the idea of using other objects as vessels. The unexpected shapes of the flowers mimic the shape of the candlesticks in a way.”

Competello, a former stylist and professional dancer, has quickly made a name among fashion-types. Since beginning her company in 2014, she has become known for elegant, languid assortments of anthuriums, Calla lilies and orchids. For Competello, the draw of flowers is in their refinement: “It’s either about the shape of the flower itself or creating a shape, rather than just putting flowers together,” she said of her ethos.

Competello began her floral work with just a single three-hour lesson in the art of Japanese Ikebana floral display. Her big break came when friend, Sabrina de Sousa and her business partner Alissa Wagner readied the opening of their restaurant, Dimes — which fast became a watering hole for Lower East Side artists, gallerists and designers. Competello emerged as the eatery’s defacto florist — giving her intriguing work premium visibility among discerning New York creatives. She uses the space as a laboratory for floral experimentation, ultimately influencing the more formal arrangements she creates for corporate clientele.

The rising talent recently leased a studio space on Henry Street in which to create her arrangements. A Meta Flora shop could be in the pipeline. “I’ve been thinking about it more now that I have a studio it just seems like a reasonable eventual step to progress in that way. I think it would be so lovely — I’ve already designed it in my mind,” Competello said of future growth.

As reported by WWD, Competello also hosts a biweekly dance class with Marc Jacobs’ personal chef and Big Little Get Together cofounder Lauren Gerrie. Moves, as the dance class is known, plans to host its next installment on Dec. 15.