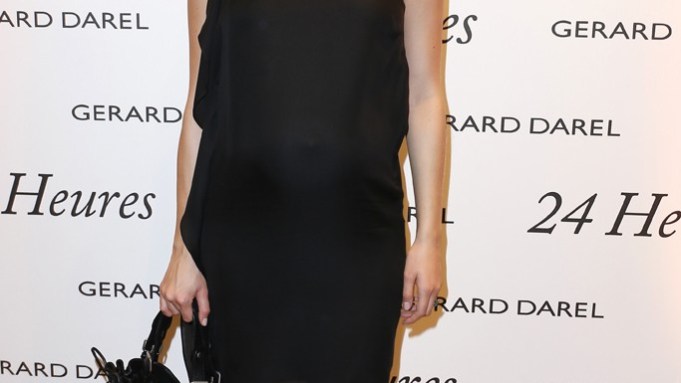 24 HOURS IN THE LIFE OF A WOMAN: Amid the throng who turned out to celebrate the 10th anniversary of the 24 Heures bag at the Gerard Darel store in Paris’ Saint-Germain district were Elisa Sednaoui and a flurry of French actresses, including Emma de Caunes, Aure Atika and Alysson Paradis. A pregnant Sednaoui, who has been Gerard Darel’s ambassador for the last two seasons, sported a black dress from the brand and said she is due in June.

“She can carry the baby’s bottle and the bib in the 24 Heures,” fashion personality Mademoiselle Agnes pointed out.

Since it launched in 2003, the 24 Heures (or 24 Hours, in English) has been expanded to include multiple looks including with fringes. The latest ones are the Eton mimicking a satchel, the Blossom and the Ibiza in raffia. Two more variations are in the pipeline for 2013. “Possibilities are infinite. It is a bag called to last for decades,” said Gerard Darel president Marianne Romestain.

To back the bag’s 10th anniversary, the brand is doing a campaign involving billboard adverting and social networks. It also asked several French actresses to customize it. The creations will be sold in limited edition.