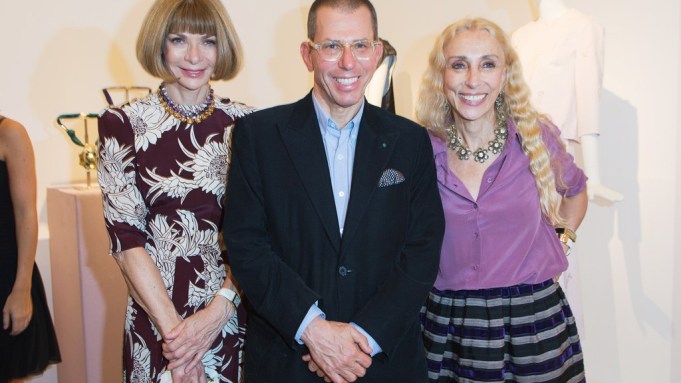 GETTING STARTED: “Congratulations to Franca,” exclaimed Condé Nast artistic director Anna Wintour (and diplomat in chief) on Tuesday night, referring to hometown favorite Franca Sozzani, editor in chief of Vogue Italia. Wintour, part of Condé Nast’s immersion this week in all things Italian, was walking through the rooms of Milan’s Palazzo Morando. The Palazzo was hosting the creations of both the finalists of the company’s talent contest “Who Is on Next?” and the designers selected by Vogue Italia’s “Vogue Talents” program. “It’s very inspiring for young designers to have such amazing visibility,” Wintour added.

While Jonathan Newhouse, chairman and chief executive officer of Condé Nast International, chatted with emerging designers, Karolina Kurkova was trying things on, including colorful headpieces by Super Duper Handmade Hats. “I wear clothes of emerging labels as much as I can,” the model said. “And here, it’s not just about the clothes, but it’s great to be able to have a chat with the designers about where they come from, what they do, what’s behind the label.”

“These kind of initiatives are so important because they encourage young, talented designers, who are fundamental, to help bring the name of Italian companies around the world,” Della Valle said.

A stone’s throw away, Giorgio Armani found a slot in his busy agenda to celebrate Fashion’s Night Out at his store on Via Manzoni — one of the few designers to mark this event this year. “It’s a great challenge that I took on personally,” said Armani, referring to his upcoming “One Night Only” event in New York on Oct. 24. “In light of the success of the Privé collection, which I have never shown in New York, I decided to bring it to the U.S. with a special event. From my early starts, the States have always warmly welcomed my collections — even if they were small.”