Gherardini, one of Italy’s oldest leather goods brands, is feting its 130th anniversary with a series of initiatives paying homage to its heritage. 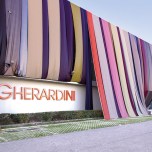 BIG BIRTHDAY: Gherardini, one of Italy’s oldest leather goods brands, is feting its 130th anniversary with a series of initiatives paying homage to its heritage. Founded in 1885 by Garibaldi Gherardini as a laboratory producing handmade leather cases, the company, which in 2007 passed under the control of the Braccialini Group, has teamed up with Italian artist Marco Fallani to transform its headquarters into a work of art. Inspired by Christo’s land art projects, Fallani completely covered the company’s building in Scandicci, near Florence, with maxi colorful stripes of Gherardini’s signature Softy, a lightweight yet resistant fabric introduced by Pierluigi Gherardini in the Seventies.

The brand, which during Milan Fashion Week later this month will display Andy Warhol’s famous “Mona Lisa” in the windows of its flagship on Via Spiga, also created a limited edition bag to mark the anniversary, available at the brand’s stores worldwide. Named Piattina Anniversary 130, the style is a re-interpretation of the brand’s Piattina flat shopping bag, which, worked in the Gherardini Softy pattern, shows one side printed with the image of two of the label’s most famous handbags, the Bellona and the Dodicidodici designs. The Piattina Anniversary 130 retails at 142 euros, or about $161 at current exchange rate.