The event was held on Saturday night at East End Studios. 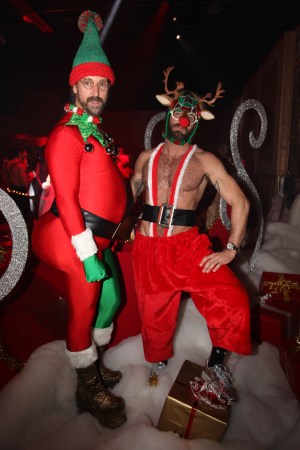 MILAN — While in November they chose to celebrate Halloween in New York, leaving Milan without their staple party, photographer Giampaolo Sgura and stylist Miguel Arnau hosted a holiday extravaganza on Saturday night at East End Studios.

“They took two hours to wrap me,” said Vionnet’s owner Goga Ashkenazi, who was dressed as a gift box with an oversize bow on the back. Among those showing the most elaborate outfits, siblings Marco and Miki Zanini sported coordinated Tyrolean costumes, while stylist Edoardo Marchiori was a sparkling Christmas tree.

“This is a preview of the new Battaglia’s bag,” said Sara Battaglia, who wore a Santa Claus dress, pointing to the silver cylindrical gift box she was carrying.