The exhibition will open Feb. 1 at the Textile Museum in Prato. 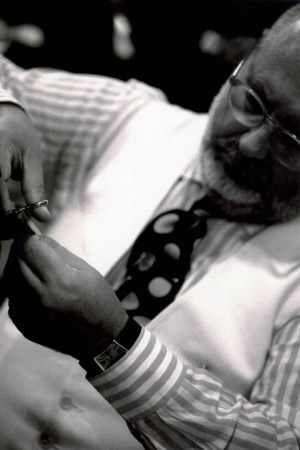 HONORING FERRE: Gianfranco Ferré’s creative talent and architectural approach will be celebrated with an exhibition, called “la camicia Bianca secondo me. Gianfranco Ferré,” or, in English, “My idea of a white shirt. Gianfranco Ferré”, opening Feb. 1 at the Textile Museum in Prato, Tuscany.

Organized by the Milan-based Gianfranco Ferré Foundation, the exhibition will showcase 27 of the most iconic white shirts designed by Ferre’ from 1982 to 2006. They include the voluminous “Painter shirt,” as well as the “Broken down shirt” consisting of a bustier with maxi collar and sleeves.

The white shirts will be the at the center of artistic installations, which will also include a number of the designer’s sketches, along with videos of the brand’s fashion shows.

“We didn’t want this exhibition to be only aesthetically interesting or exciting, but we decided to accompany this small army of white shirts with documents to show young people how Gianfranco Ferré used to work, his method and his idea of a project,” said Rita Airaghi, Ferré’s cousin and director of the Gianfranco Ferré Foundation.

The exhibition, which according to Airaghi may travel to other European institutions in the next couple of years, will be open until June 15.

While the designer’s legacy remains relevant, questions about the future of the label linger. According to a source, Dubai-based Paris Group, which acquired the brand in 2011, may not produce the women’s spring/summer 2014 collection. As a consequence, employees at Bologna’s manufacturing arm ITC are currently in cassa integrazione, an Italian term for government-funded wage subsidy.