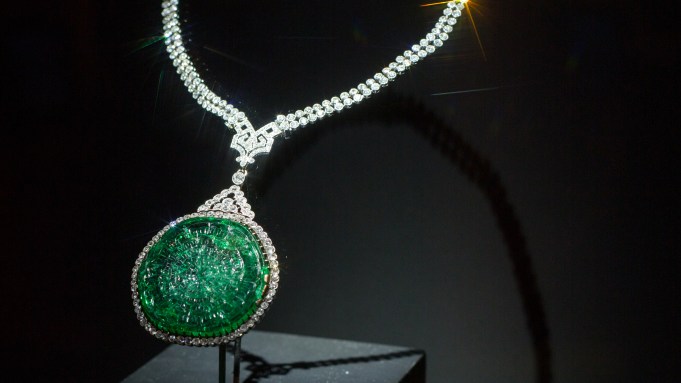 SPARKLE PLENTY: Twenty-nine of the Smithsonian Institution’s biggest faceted gems will be exhibited together for the first time beginning Friday at the Perot Museum of Nature and Science in Dallas.

“The Smithsonian collection is like the crown jewels of the United States,” said collection manager Russell Feather. “It’s the highlight of the 1,500 gems we exhibit.”

Among the eye-poppers in “Giant Gems of the Smithsonian” are a cushion-cut American Golden topaz measuring 22,892-carats and a marquis irradiated blue topaz bigger than a goose egg and far heavier — 3.1 pounds. The show also boasts the largest-known faceted peridot and a 19,747-carat smokey citrine quartz dubbed “the football.”

Only three of the remarkable gems are set into jewelry: a 911-carat emerald that was cut into a lotus flower in 17th-century India, a 56-carat amethyst necklace circa 1915 by Louis Comfort Tiffany, and a 396-carat kunzite on a baroque pearl necklace designed by Paloma Picasso for Tiffany Co.’s 150th anniversary in 1986.

The signature stone that’s missing is the Hope Diamond, which lives at the National Museum of Natural History in Washington, D.C.

Perot officials credited benefactor Lyda Hill, a Hunt Oil heiress who signed The Giving Pledge, with instigating and funding the show. Running through mid-January, “Giant Gems of the Smithsonian” is located with other spectacular rocks in the Lyda Hill Gems and Minerals Hall, which is one of the Perot’s most popular exhibits.