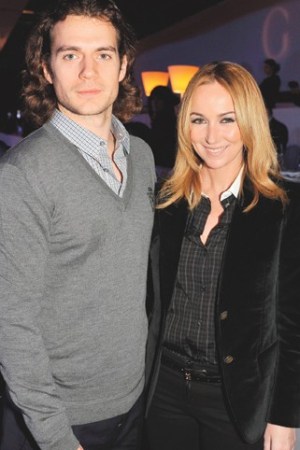 GIDDY UP: “Any occasion to get dressed up and come to horse shows, I’ll jump on it,” up-and-coming British actor Henry Cavill said Sunday as he took in the finals of The Gucci Masters, a four-day equestrian competition sponsored by the Italian leather goods giant and held at the Paris Nord Villepinte exhibition grounds. The 26-year-old star of the Showtime series “The Tudors” said his next big-screen project is a lead role in a sword-and-sandals film called “War of Gods,” directed by Tarsem Singh. It starts shooting in April. “It’s Caravaggio meets ‘Fight Club,’” Cavill said by way of summary.

Marion Cotillard and her paramour Guillaume Canet, wearing matching dark fedoras, and the accomplished equestrienne Charlotte Casiraghi, dressed in a caramel leather Gucci coat and towering heels, were among other VIPs at the event.

It culminated with Gucci creative director Frida Giannini awarding the 200,000 euro, or $292,340 at current exchange, Gucci Grand Prize to competitor Jos Lansink, representing Belgium. For Giannini, not only did the event represent a return to the Florentine house’s roots, but it was also a chance to revisit an old passion. “I grew up with horses and rode constantly until I was 18,” she said. “Now I hardly have time so being here is like a dream for me.” To mark the occasion, she created two limited edition products — a silk scarf and a wool horse blanket ($358 and $5,115, respectively, at current exchange). These were displayed at the brand’s stand along with a selection of current items and vintage pieces, among them a 1971 Jackie bag and Seventies-era equestrian-inspired jewelry.

MISSONI’S MAMBO: Missoni added another continent to its retail portfolio with the opening last week of its first South American store in São Paulo’s upscale Iguatemi mall. The 1,765-square-foot boutique, designed in the style of other Missoni stores, features the house’s ready-to-wear and home collections. Vittorio Missoni, chief executive officer of the brand and son of its founders, said he chose Brazil for the Latin American flagship “because of the strong evolution of the Brazilian market in the last few years, one marked by a positive economy, and the growth of new fashionable malls and multibrand boutiques.” In particular, Iguatemi is the “premier mall location in São Paulo for brands like Missoni,” he added.

Carlos Jereissati Filho, whose group owns the mall, noted, “Missoni has only 35 stores worldwide, so its choice of Brazil for its first Latin American location shows how attractive this market is, one expected to grow 5 to 6 percent in 2010.” The mall’s other foreign brands include Gucci, Bulgari, Tiffany, Louis Vuitton, Salvatore Ferragamo, Ermenegildo Zegna and Christian Louboutin, which opened this year. Diane von Furstenburg will open a shop there next March.

PURE FASHION: Fashion types looking to escape the cacophony of the holiday season will find a familiar face at the new Pure Yoga studio that opens today on New York’s Upper West Side. Former Prada executive Michelle Demus is program director for the 20,000-square-foot, highly designed West 77th Street space. Inspired by Indian architecture, the new location has eight studios, a series of courtyards and lounges designed in shades reminiscent of Indian saris. An ire walnut front desk, handcrafted from a fallen tree; a hand-carved marble wall mounting; a circular ceiling, and traditional Indian lunch boxes are some of the more unusual accents rooted out by vice president of design Aaron Richter.

Whether dealing with the holiday crush, fashion week, market week or work-related travel, a few deep breaths could go a long way, according to Demus. “Yoga is what really kept me sane when I was working in fashion and traveling to Milan. Fashion definitely has some high drama,” she said. “For me, this brings my work all together in terms of the fashion and design of the space. I miss my clothing allowance, though — that has to be said on the record.”

OUT OF THE CLOSET: Elton John and David Furnish are known more for garish shirts, Baroque costumes and jumpsuits than their understated style, but that didn’t stop fans flocking to Out of the Closet, the duo’s charity pop-up boutique launched in London on Saturday. Crowds lined the block at dawn for the Covent Garden store to scoop up donated personal items including metallic moon boots, powder blue tailored suits and chain mail vests, among adventurous pieces by Versace, Dior, Prada, McQueen, D&G and Jean Paul Gaultier. Prices ranged from 10 pounds, or $16 at current exchange, for accessories, up to 400,000 pounds, or $650,000, for iconic designer pieces. The sale ends Dec. 19. All proceeds will be donated to the Elton John Aids Foundation.

NET EARNINGS: Anna Sui is the latest designer to have added e-commerce to her existing Web site at annasui.com. Consumers can now shop for a limited selection of her designs at the site, from illustrated T-shirts priced from $40 to $59 to her original signature or “Live your Dream” fragrances at $62, and assorted items like a $45 Anna Sui “Bearbrick” doll, a “Cheerleader” motif mug for $33 and an “Angel” motif scarf for $29. All merchandise can be shipped within the U.S. Dean “Chooch” Landry, who created the look of the original site, was also responsible for the visuals of the e-conmerce feature.

PITCHING IN: Twenty-two designers are joining Swarovski in the fight against breast cancer. Alberta Ferretti, 3.1 Philip Lim, Alexis Mabille, Azzaro, Boudicca, Catherine Malandrino, Diane von Furstenberg, Donna Karan, Fendi, Gaspard Yurkievich, Gianfranco Ferré, Giorgio Armani, Givenchy, Jean Paul Gaultier, Lanvin, Marios Schwab, Martin Grant, Missoni, Sonia Rykiel, Thakoon, Valentino and Vivienne Westwood have each designed a one-of-a-kind Little Black Dress using Crystallized–Swarovski Elements. Known collectively as Crystallized-Ways to Say Black, the group of dresses will be unveiled at a soiree at the Hotel Pozzo di Borgo in Paris on Jan. 27 during the Paris couture; the show will open to the public the next day before traveling on to Beijing. The project will culminate on the auction block at Phillips de Pury in New York in fall. Proceeds of the auction and catalogue sales will benefit breast cancer research initiatives at the League Against Cancer and the American Cancer Society.

BOAT HOUSE: Tsumori Chisato, the quirky, fantasy-charged Japanese brand which recently hijacked “The Little Prince” as a theme for one of its fashion collections, is to collaborate with Petit Bateau on a baby, kids and adult capsule clothing collection for fall/winter. Vanessa Paradis, Helena Christensen and Antony Hegarty count among Tsumori Chisato fans.