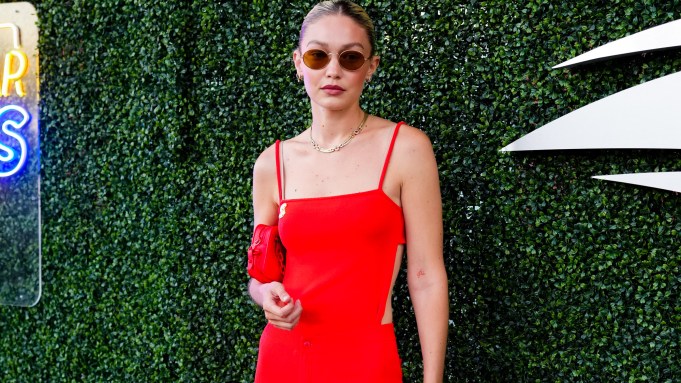 Gigi Hadid made a fashion statement during her appearance at the U.S. Open.

On Wednesday, the model was among many of the A-list guests at the Arthur Ashe Stadium to cheer on Serena Williams as she played against Estonia’s Anett Kontaveit, currently ranked second in the world, in the second round.

She, along with her sister Bella Hadid, Leah McCarthy, Marc Kalman, Anthony Anderson and La La Anthony, among others, sat in a suite as they watched Williams play Kontaveit in a grueling three-set match. Williams ended up winning 2-1 and will advance to the third round to play Australia’s Ajla Tomljanović

A slew of celebrities have come out to watch the U.S. Open this year, mostly due to Williams’ impending retirement from tennis after the tournament. Stars such as Tiger Woods, Dionne Warwick, Spike Lee and Seal were also in attendance.

Last month, the tennis legend revealed in an article she wrote for Vogue that she would “evolve away” from the sport after the 2022 U.S. Open, hinting at retirement.

She penned she “never liked the word retirement” and prefers to use “evolution” in terms of what’s in store for her for the future, which includes potentially growing her family and business ventures. Williams also has a sustainable clothing line called S by Serena, inspired by ‘90s streetwear.