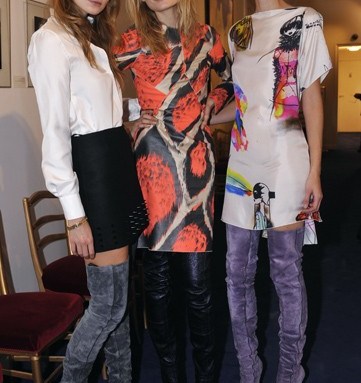 THE ENGLISH ARE COMING: “It was Worth, an Englishman, who created couture in France,” Pierre Bergé declared Tuesday night in Paris, as he presented an award as president of France’s National Association for the Development of the Fashion Arts to Giles Deacon, the second British designer in a row to win the accolade. Thanks to a grant of 160,000 euros, or $233,470 at current exchange, Deacon is staging his spring fashion show in Paris on Oct. 8. “It’s a huge honor for me,” said Deacon. “Hopefully it’s going to be a great season.” Fellow Brit Gareth Pugh won the accolade in 2008. Jeremy Scott was among the guests at the 20th-anniversary award ceremony, before flying back to Los Angeles to work on his new Adidas collection. Scott said he has also designed a special edition bag for French luxury goods company Longchamp to celebrate the association’s anniversary.

TEA TIME: “My former assistant labeled me a renaissance woman,” noted multitasking stylist, consultant and Harper’s Bazaar fashion editor Melanie Ward. Her latest project is a fashion collection of her own, Blouson Noir, designed with knitwear consultant Graham Tabor. The first capsule collection will be presented in an apartment in Paris’ Marais district from Sunday to Oct. 10. Ward, who worked as creative director for Helmut Lang for 13 years, described the line as chic, ageless and cool, with sharp pricing. “The whole line was inspired by tea towels — it’s very textural with lots of loose weaves,” said Ward.

LIVE WIRE: Louis Vuitton is courting its online fans and giving them a virtual front-row seat at its next fashion show. The French luxury house said it would stream its women’s ready-to-wear show on its Facebook page on Wednesday at 2:30 p.m. CEST. Viewers will be able to comment on the show as it happens. Following the event, footage of the show will be available on demand for 24 hours. Vuitton, which created its Facebook account in July, claims to have been the first luxury brand to take to tweeting.

MY PRECIOUS: “People have gotten used to looking at fashion, but they haven’t gotten used to looking at jewelry, and we want to change that,” said Judith Price, president of the National Jewelry Institute, which this evening at the Bristol Hotel will present the second edition of Designer Showcase, which gathers new jewelry creations by a group of international designers. Among the highlights Price mentioned were a precious apple and serpent Temptation brooch by France’s Marchak and some great Mexican opal pieces by New Zealand’s The Artist Goldsmith. At the event, Suzy Menkes, fashion editor of the International Herald Tribune, will receive the National Jewelry Institute’s first award, for her passionate coverage of the jewelry market.

BLUE CLUES: Jeans on the Hussein Chalayan runway? What a concept. The London-based designer plans to carry on with his collaboration with J Brand for a second season and present styles on the runway at his show on Sunday. The expanded collection for spring includes stretch capri leggings, loose-fit chinos and city shorts.

WYCLEF’s NEW SHOES: Timberland and Wyclef Jean are making music together. The apparel and footwear company partnered with the Grammy Award-winning musician and his Yéle Haiti Foundation to inspire consumers to take action in protecting the environment. The pair collaborated on a 16-boot footwear collection for men, women and children, slated to launch in late November under the Timberland Earthkeepers line. For every pair sold, $2 will be donated to the Yéle Haiti Foundation to support reforestation in Haiti. Jean will celebrate the collection tonight at WNYC’s the Greene Space in New York.