Society typed turned out for a delightful luncheon at the New York City Ballet today. 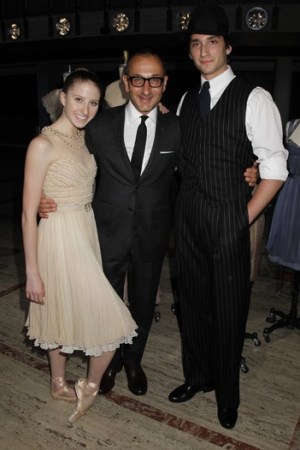 Society types have several opportunities to see the ballet, in all its tutu-ed and perfect pirouette glory. But watching a rehearsal where the dancers wear legwarmers and hoodies and, gasp, mess up, is almost unheard of, which is why the lunch hosted by Peter Martins, Jim Gold and Gilles Mendel at the New York City Ballet on Wednesday was such a treat.

Susan Gutfreund, Lisa Airan, Padma Lakshmi, Kalliope Karella and Julia Koch arrived early for a sneak peek at Christopher Wheeldon’s “Estancia” and, later, a glimpse at the costumes Mendel designed for the upcoming 1920s-themed ballet “Call Me Ben,” which has its premiere June 5. Two dancers wearing Mendel’s creations mingled with the guests during cocktails.

Her partner was dressed in a pinstripe suit and said there were a few rules that went along with wearing a haute couture costume. “We’re not allowed to sit down in them,” he said, rushing back to rehearsal and leaving the ladies to their luncheon.