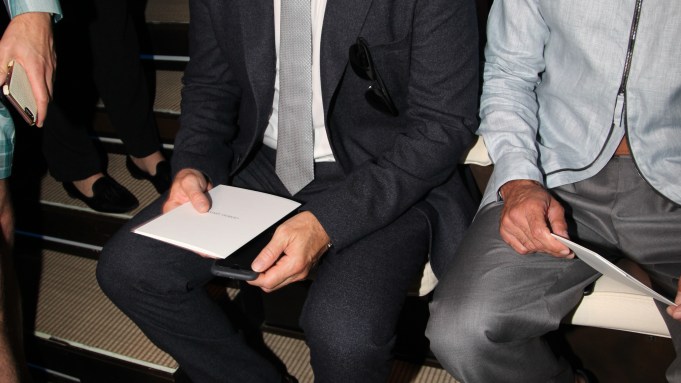 Longtime Giorgio Armani supporter Ricky Martin took a brief break from his world tour to attend the designer’s show on Tuesday. The artist was unfazed by the tour’s impressive list of locations, from Tel Aviv and Moscow to London, Argentina, Brazil and Colombia. “I’ve been performing since I was 12 years old. It’s in my blood and it’s an opportunity to express myself through music. I enjoy the public’s reaction. It’s addictive,” said Martin, who said changes of clothes on stage can run up to 17. “Four people help me dress,” he added with a laugh.

“I’m on holiday,” Kevin Spacey said briefly, as the actor added he starts filming the next episodes of “House of Cards” in July.

“He is so talented and plays roles where he is really mean, but he is a lovely person,” Armani said of Spacey after the show.

While discussing topics ranging from tattoos — “not a good idea when you turn 50” — to Donald Trump — “his remarks are disconcerting” — the designer urged the Italian Camera Nazionale della Moda to work on the calendar. “Why should I be the only one to always close Fashion Week? There should be a turnover and I hope some of my colleagues will collaborate on this issue.”