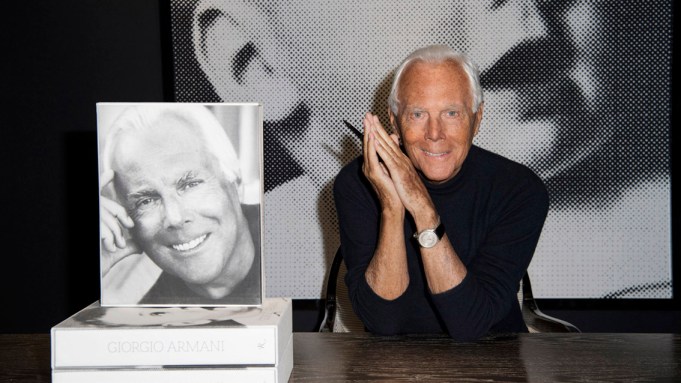 Giorgio Armani just wrapped a trip to Moscow April 12 to 14, which celebrated his group’s presence in Russia. The designer was last in the country in 2009. He took the opportunity to present his autobiography “Giorgio Armani,” last Wednesday at his signature brand’s boutique on Tretyakovsky Proyezd. The unit, opened in March last year, covers a total 5,400 square feet over three floors. Armani signed copies of his book, published by Rizzoli New York and released in September. An exclusive private dinner followed the book signing. The following day, the designer presented his men’s and women’s fall 2016 collection at event space Tesla 4000, in front of 480 guests including celebrities, socialites, dignitaries and the press, with an after party.

“I was glad to be back in Moscow after so many years,” the designer said. “Russia is a key market, with many special customers who have always embraced my vision of style and lifestyle with great enthusiasm. This is why I wanted to create a special event to present my latest collections, and my book, which sums up my aesthetic through images.”