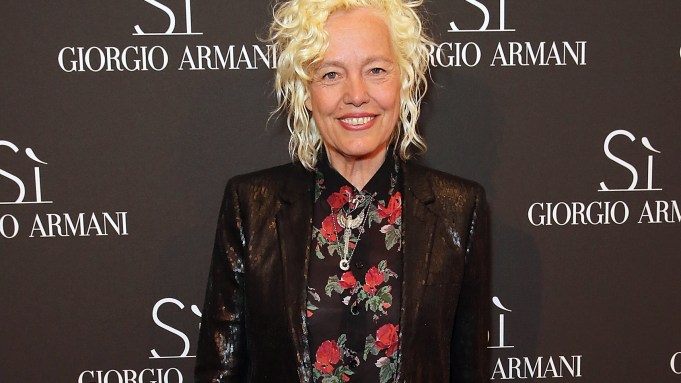 SAY YES: Giorgio Armani marked the launch of its latest fragrance, Si Le Parfum, with a cocktail at the Royal Institute of British Architects in London starring Cate Blanchett.

The actress, who is the face of the fragrance, hosted the event dressed in a powder pink Giorgio Armani strapless dress. The Oscar winner spent the evening taking pictures with guests and talked about the new fragrance being her favorite from the Italian house’s Si range.

“The latest incarnation is my favorite of all of them because it’s the quintessence of Si,” said Blanchett at the event where guests included Bianca Jagger, Ellen von Unwerth, Nicky Haslam and Neelam Gill.

The fragrance, which will be available to purchase in September, has a strong amber essence. Top notes, such as blackcurrant, echo the inaugural perfume in the range, while bergamot, vanilla and patchouli also make up the juice.

The brand also launched the “Si Women’s Circle” earlier this year, a digital project that focuses on high-profile women who have said yes — “si” in Italian — to their aspirations and can share their stories with women around the world.

Three of the women celebrated as part of the project joined Blanchett at the event: Opéra de Paris ballet dancer Charlotte Ranson; 3-D pioneer Cecile Schmollgruber; and Kee Yoon Kim, who quit her job as a lawyer to becoming a stand-up comedian.

“No pressure whatsoever to have to try to embody the modern woman — but I’ll do my best, we’ll all try to do our best,” Blanchett told WWD.

“She is one of the best actresses out there at the moment, she is beautiful, but at the same time she’s very powerful — she doesn’t seem like the person who would be told what to do,” said von Unwerth, who is working on a new book of her work, which will be published this September by Taschen.