The pre-Golden Globes party whirl continued Tuesday night with a party at the Beverly Hills Hotel. 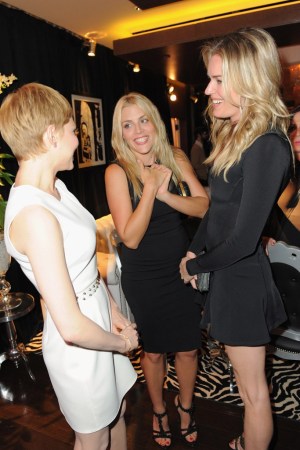 GIRLS’ BEST FRIENDS: The pre-Golden Globes party whirl continued Tuesday night with Forevermark Diamonds and InStyle’s bash at the Beverly Hills Hotel, where Best Actress nominee and guest of honor Michelle Williams declared herself, “Overwhelmed, excited and happy — all of the above.” At her side for moral support was BFF Busy Philipps, who had practice last year as Williams’ date throughout awards season.

“We can finish each others’ sentences,” said Philipps. “Which is great because then I don’t have to talk,” added Williams, who said the pair planned to coordinate their outfits this week. “The key to being a good date is to not overshadow your friend in her big moment by wearing, say, a red Jessica Rabbit dress,” said Philipps, whose simple black Givenchy sans jewelry set off Williams’ white Versace frock and delicate Trau for Forevermark ring and bangle.

This story first appeared in the January 12, 2012 issue of WWD. Subscribe Today.