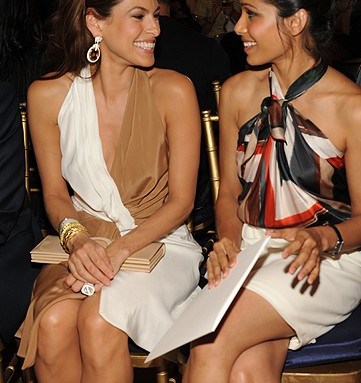 Ferragamo rounded up a few of its favorite actresses Tuesday afternoon to check out its resort collection at New York’s James B. Duke Mansion. Among the first to arrive was Eva Mendes, who will soon be heading upstate with Ryan Gosling to shoot Derek Cianfrance’s drama “The Place Beyond the Pines.” The actress certainly didn’t pine over the decision. “When you have the opportunity to work with an amazing director and incredible actor, you jump at the chance. When they come calling for you, a girl accepts quickly,” Mendes said before returning to a chat with Rachel Roy.

From across the way, Minka Kelly mouthed to Mendes, “You look great.” Before shipping out to Miami to shoot the TV remake of “Charlie’s Angels,” Kelly practiced martial arts to help with the action stunts her role requires. But she can wing it if need be, as was the case recently when having to drift a car with a standard transmission for a scene. “I knew how to drive with a clutch but not how to drift a car with one,” she said. Contrary to published reports, Kelly isn’t gunning to walk down the aisle with Derek Jeter. Asked if she had decided on a wedding dress, the actress said, “Oh, I’m not getting married,” before turning away.

Another front rower, Freida Pinto, was also pressed for time. Asked about the three flicks she has coming up in the next four months, she said, “You can IMDb them.” (That would be “Rise of the Planet of the Apes,” “Immortals” and “Black Gold.”) In fairness to her, she has been trying to take a break from Tinseltown. Fresh from a sojourn to Istanbul with a friend, she said, “That’s over and done with, unfortunately. Now I need to find another break.”

The 26-year-old Indian actress won’t be retreating from the fashion scene anytime soon, but she is discerning about the designers she supports. With no shortage of suitors, she tends to favor the ones who have always helped her. “It’s also about being photographed. It’s also about being proud to wear their clothes — not just because they give them to you.”

“I feel lucky to have been invited,” she said.