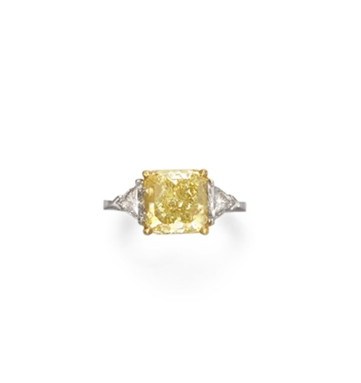 GISELE’S SALE: With star quarterback Tom Brady in tow, who needs the remembrance of boyfriends past? Gisele Bündchen is putting a few pieces of jewelry up for sale, including a colored diamond ring estimated to bring in $15,000 to $20,000 and a diamond pendant necklace estimated to fetch up to $150,000 at Christie’s Jewels: The New York Sale, on Oct. 15. Sources speculate that the pieces were given to her by former beau Leonardo DiCaprio. Also in the sale are two stones, dubbed the Ponahalo Diamonds, comprising 102.11-carat and 70.87-carat rectangular-cut stones that came from the same 316.15-carat diamond found by De Beers Group in 2005. A portion of the proceeds of the Ponahalo Diamonds, which are estimated to fetch from $2 million to $4 million, will be donated to the Diamond Empowerment Fund, a nonprofit organization geared to empower diamond-mining countries in Africa. Christie’s and Alberta Ferretti will host a party to show the Ponahalo Diamonds at Haunch of Venison in New York on Sept. 23.

RUNNING BASES: While jewelry isn’t necessarily his thing — aside from his World Series championship rings — watches are certainly an accessory New York Yankees shortstop Derek Jeter uses to his advantage. “A long time ago someone told me that a watch is the first thing a woman looks at on a man,” said Jeter, one of New York’s most famed bachelors, at the Four Seasons restaurant on Tuesday, where he helped launch a new collection of limited and special edition Movado 800 Derek Jeter Chronographs. Jeter, who is featured in the brand’s advertising campaign, worked closely with Movado on the development of the collection, which includes a 47-ml. rose gold chronograph engraved with Jeter’s name and number (2) and costs $25,000. “I don’t like anything that’s too flashy,” mused Jeter about watches. Movado is donating $100,000 to Jeter’s Turn 2 Foundation. As for his attire outside the pinstripes, Jeter likes to play it casual. “I live in Florida in the off-season,” he said, motioning that Florida isn’t the kind of state that requires a jacket and tie.

YES, WE KHAN: The Bellinis were flowing Monday night at Harry’s Bar in London at a dinner hosted by Jemima Khan and Vanessa Seward to celebrate Khan’s spring capsule collection for Azzaro. Guests included Gwyneth Paltrow, Trudi Styler, Claudia Schiffer, Samantha Cameron, Bella Freud, Laura Bailey, Liberty Ross, Tim Jefferies, Lady Annabel Goldsmith, Ben Goldsmith, India Jane Birley and David Tang, who feasted on risotto with porcini mushrooms and grilled sea bass in the cozy, dimly lit dining room. Jemima Khan for Azzaro will be shown to buyers next month and will hit stores in February. While Khan may have been the star of the evening, that didn’t stop her pals — and namely Tang — from giving her a good old ribbing at the end of the meal. “I want you all to know that Richard Caring told me to make sure Jemima didn’t leave without paying the bill,” he said, referring to the new owner of Harry’s Bar.

VOCAL VIVIENNE: Madonna, whose latest single is in support of Barack Obama, isn’t the only one injecting politics into pop music. Vivienne Westwood is tossing her hat into the ring, too: “I’ve written a political song about the legalized, 42-day detention of suspected terrorists,” said the designer at the London launch of her compilation CD at Selfridges on Monday. “I never listen to the radio, but I had to recently to see who’s out there to sing it. I didn’t like any of them! So it looks like I’ll have to. I’m not a singer, really, but I’ll do something.” Westwood’s CD, “Catwalk Breakdown,” a selection of favorite tracks by everyone from Tchaikovsky to The New York Dolls and Luca Mainardi, is on sale this week in Selfridges’ in-house concept store, the Wonder Room.

BLACK ON BROWN: So what was beleaguered British Prime Minister Gordon Brown doing slapping fellow Scotsman Graeme Black on the back Monday night during a cocktail reception at Number 10 Downing Street? Brown was thanking Black for dressing his wife, Sarah, who hosted the reception to celebrate 25 years of London Fashion Week. Black will be dressing Brown for her appearance at Naomi Campbell’s Fashion for Relief event tonight and for a UNICEF event that takes place in New York later this year. “Sarah’s my kinda woman,” said Black. “She’s sharp, beautiful — and half-Scottish.”

Also at the reception, The British Fashion Council unveiled plans to establish a fund to support new designers’ businesses and to strengthen London fashion’s international presence. The new project, inspired by the CFDA/Vogue Fashion Fund and meant to mark the 25th anniversary of London Fashion Week, already has backing from Topshop owner Sir Philip Green, and the British model Erin O’Connor, who is also a vice chairman of London Fashion Week. BFC chairman Harold Tillman said the first awards would be given to designers next year.

IN THE BAG?: Could Renaud Pellegrino, which was acquired in May 2007 by Martinique-based family holding Holmex, be in play again? According to sources, the cult French maker of luxury leather goods treasured by the likes of Queen Rania of Jordan is on the lookout for a new investor, and is being advised by Paris-based luxury consultant Concetta Lanciaux.

TIME OUT: After taking in the Temperley London show on Monday, Mischa Barton kicked back at the designer’s after party at trendy members club Bungalow 8. “I’m taking a bit of time out being in London seeing friends and family,” she said. Having just finished her second line of handbags and headbands for her collection with accessories designer Stacey Lapidus, Barton said she would start shooting a new film in November titled “Nepal” opposite Charlie Sheen. “I will be filming in India, which will be exciting,” she said. Meanwhile, Mark Ronson said he’s been busy in the studio working with British rockers The Rumble Strips.

ESTELLE BELLE: Milan Fashion Week kicked off early with a live performance by Estelle at the Versace theater Monday night. The invite-only concert was a culmination of Estelle’s stay in Italy to promote her second album, “Shine,” during which the British diva was dressed by Versace. “Fashion for me is an expression. It has to be bold and clean, like me and like my music,” Estelle told WWD, adding that Versace fits her style, as it makes “good clothes for women, for voluptuous women; whatever size you are, they just work.” Dressed in a figure-hugging pre-fall printed silk dress and balancing on a pair of vertiginous Versace heels, Estelle sang to the audience for 45 minutes, performing tracks from her album, including the hit “American Boy.”