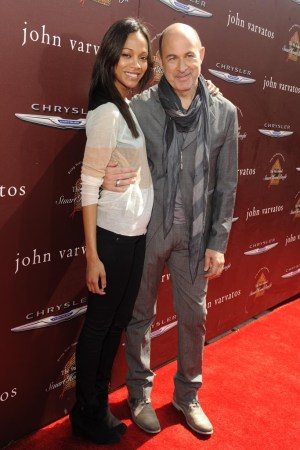 GIVING BACK: Sunday’s ninth annual John Varvatos Stuart House benefit, hosted by Leslie Mann and Judd Apatow, brought out Zoe Saldana, Emmy Rossum, Steven Tyler, Cindy Crawford, Bryan Cranston and David Schwimmer. “When we set out to do this in 2002, we thought we would do it for a long time, but you never really imagine the scope of how things grow,” said Varvatos. This year’s event raised $700,000 for Stuart House, a rape treatment center in Los Angeles serving children and families at no cost. “I’m so happy to raise awareness and cash,” said Mann. “After we toured the center, it was a no-brainer [to get involved].

“There are a lot of people here who have done well in life,” said Apatow. “It’s a great way to give back to things that you care about.”

The event, held in and around Varvatos’ Melrose Avenue store, featured live and silent auctions, a kids’ tent, shopping and a private performance by Dave Matthews. Varvatos brought daughter Thea, and Rachel Zoe, James Van Der Beek and Apatow and Mann also made the afternoon a family outing. Schwimmer, who is on the board of the Rape Foundation, was also on hand.