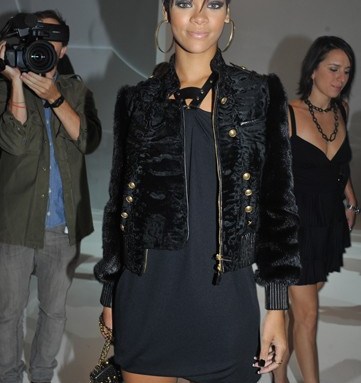 TAKE A BOW: Grammy award-winning singer Rihanna was in Gucci’s front row Wednesday, underlining her ties to the Italian house after shooting its first ad campaign in collaboration with UNICEF over the summer. “I give them so much respect,” the Barbados-born star said of Gucci’s charitable ways. Rihanna was on tour in Europe promoting her latest single, “Disturbia,” before heading to Australia and New Zealand in October. “Then we’re going to play around in the studio for a while,” she said. She also pointed out that her own fashion collection is still in the cards. “I’m not one to rush into anything. I want to take my time,” she said. “I can’t say when it will be released, but it’s definitely going to happen.”

A TALL ORDER: Attending Roberto Cavalli for the first time, actress Marisa Berenson said she’s launching a line of all-natural face creams, including a “magical elixir.” Berenson, who stars in Luca Guadagnino’s latest film, “I Am Love,” with Tilda Swinton, noted that she rounds out her beauty regime with homeopathic and holistic treatments. L’Oréal model Ayako Kawahara also sat front row with Kelly Rowland, Miss Universe 2007 Riyo Mori and actress Maria Grazia Cucinotta. Unnoticed in the second row, seated behind his wife, was tenor Andrea Bocelli. French model Nadege du Bospertus was also there, sizing up the current crop of runway girls for her second stint as a judge on the new series “Italy’s Next Top Model.” “It started yesterday,” she said. “We’re looking for normal girls to make into models. Obviously, when I say normal, I mean, the girls have to be 1.8 meters [5 feet, 9 inches].”

COCO MADEMOISELLE: After Milan Fashion Week, many high-profile members of the international fashion flock will be heading for Venice — but for a different kind of runway show. On Saturday, Cornelia “Coco” Brandolini d’Adda will walk down the aisle in an Oscar de la Renta gown to wed Matteo Colombo. De la Renta is expected to attend, along with the likes of Valentino, Diane von Furstenberg, Francisco Costa and Brandolini d’Adda’s employer, Alberta Ferretti. The mother of the bride, Georgina Brandolini, will be wearing Calvin Klein. About 300 guests are expected in total.

WALKING SHOES: The “Salvatore Ferragamo: Evolving Legend 1928-2008” exhibition hit Milan’s Triennale museum, where 12 rooms are dedicated to the life and work of the late shoe great. Two areas were added to the original exhibition held at the Shanghai Museum of Contemporary Art earlier this year to celebrate the company’s 80th anniversary: One centers on the upcoming movie “Australia,” whose lead actress, Nicole Kidman, wears Ferragamo shoes, while the other showcases the designer’s passport and his certificate of naturalization in the U.S., among other personal items.

“This room underscores how international Ferragamo and his company were early on in their history,” said Stefania Ricci, curator of the show and of the Ferragamo museum in Florence. “He first went to Japan in 1950.”

Ferragamo chief executive officer Michele Norsa said the exhibition may move on to two other cities in Asia, mentioning Seoul and Tokyo as likely destinations. “[South] Korea is our third market, it’s huge for us,” he noted, as the likes of Róisín Murphy, Roberto Bolle, Vittorio Missoni, Luisa Beccaria, Gimmo and Vittoria Etro and Romeo and Lara Gigli filed through.

WEB GEM: September has been a busy month for Damiani. After relaunching the Calderoni 1840 brand, acquiring the Rocca SpA retail chain and unveiling a new collection for Jil Sander, the Italian jeweler now has gone digital and launched its new Web site, damiani.com, on Wednesday promising “a voyage into the concept of luxury of a brand that makes detail its strong point.”

RING MY BELL: Spurred on by the sale of one million units of its touch-screen portable phone, Prada is launching a second phone with South Korean giant LG Electronics Inc. The sleek, silver model will be available in November and will retail starting at 600 euros, or $882 at current exchange. The first countries to land the phone are England, France, Germany and Italy.

RUNNING THEME: PPR hasn’t wasted time plotting synergies between its latest acquisition, Puma, and its stable of luxury brands at Gucci Group. The activewear brand has teamed up with Sergio Rossi for a capsule collection that will bow in January at Paris’ upscale boutique Colette during couture week. A design team at Sergio Rossi reinterpreted Puma’s iconic Clyde sneaker, which originally made its debut in 1973, including a high-heeled mary jane model with Velcro straps and a lace-up pump in a range of colors. Meanwhile, sources said Rossi’s creative director, Edmundo Castillo, is exiting the brand, with Francesco Russo, who has designed shoes for Yves Saint Laurent under Stefano Pilati, set to step into Castillo’s shoes. A Sergio Rossi spokeswoman declined comment.

SMOOTH SAILING?: There’s speculation in Italy that Prada chief Patrizio Bertelli might be thinking of putting up sails again and entering his team in the new Louis Vuitton Pacific Series race in Auckland, New Zealand, in February. Bertelli’s Luna Rossa boat competed in three editions of the America’s Cup: in 2000, 2002 and 2007. It is understood that final participants in the Vuitton series will be unveiled shortly.

RED-EYE REDUCTION: With security regulations allowing passengers to take only a handful of liquid-based beauty products onboard airplanes, looking good after a long-haul jaunt is about as likely as enjoying a pre-flight frisk. Now, Paris retailer Colette is making obeying the rules cool by teaming up with airport operator Aéroports de Paris to create a security-friendly beauty kit. The limited edition packs, which will be sold in Colette, Colette x Gap and Beauty Unlimited stores in Charles de Gaulle from Sept. 29, are transparent pouches dreamed up by Japanese designer Mark’s and six travel must-haves, and contain a Kiehl’s lip balm, antiseptic wipes and Smiley eau de parfum. The kit will retail at 45 euros, or $66 at current exchange.

EYE ON THE PRIZE: Speaking of Yves Saint Laurent, the fashion house’s current design steward, Stefano Pilati, is heading to Madrid next month for a fashion award. He is to receive the Best International Designer award at the Telva Fashion Awards on Oct. 20. Recent recipients include John Galliano, Dolce & Gabbana and Jean Paul Gaultier.

COMINGS AND GOINGS: Mark Lee, who, as reported, is stepping down from Gucci as president and ceo effective Dec. 31, isn’t the only executive exiting the Italian brand. Masaki Iwase, ceo of Gucci Japan, has resigned after eight years at the Gucci Group, effective in November. A Gucci spokesman said Gucci Japan’s chief financial officer would cover Iwase’s duties until a successor is named.

NEXT ON LINE: Online retailer Yoox.com has partnered with Vogue-sponsored “Who Is On Next?” talent search. Starting Friday, the Internet retailer will sell Gabriele Colangelo’s spring-summer 2009 collection. Colangelo, with a past working experience at Versace, among others, was one of the competition’s winners this year.

HOME FOR THE HOLIDAYS: Jonathan Adler has taken nesting to new heights, and his marriage to Simon Doonan, creative director of Barneys New York, last week will no doubt only help the cause. The potter/interior decorator/retailer/“Top Design” judge has lined up his first Upper West Side store location at 304 Columbus Avenue, right next door to the Housing Works Thrift Store. The shop is slated to open before the end of the year and will be Adler’s eighth.

BRUNO’S FAN CLUB: While Manolo Blahnik and Christian Louboutin are known for signing the soles of their designs at personal appearances at stores, Roger Vivier creative director Bruno Frisoni is not one to ink up his creations. Frisoni, who briefly flew into New York before jetting back to Paris to unveil his spring collection, was equipped with a stack of sketches, which he autographed for admirers at Saks Fifth Avenue’s Vivier event earlier this month. The two-hour event resulted in the sale of a whopping 100 pairs of haute shoes and handbags.

MULBERRY GETS ARTY: Mulberry and Vogue hosted a dinner Tuesday night at Honor Fraser’s Culver City, Calif., gallery to celebrate the fall collection as well as the opening of Alexandra Grant’s latest show, which is based on the five senses. Emmy Rossum, China Chow, Amanda Goldberg, Justin Kerns, Gregory Parkinson and about 30 others sat at a long table down the middle of the gallery under bright white lights, all the better to take in the intricate, oversize canvases, one of which already has been acquired by the Los Angeles County Museum of Art. One diner’s request for red wine was declined, due to the proximity of the paintings, but when Shiva Rose wondered aloud about the art, she got a direct answer from the gallerist herself. “It’s not something you do every day, dine in one’s gallery,” said Fraser. “But I think it’s a nice departure from the usual fashion event.”