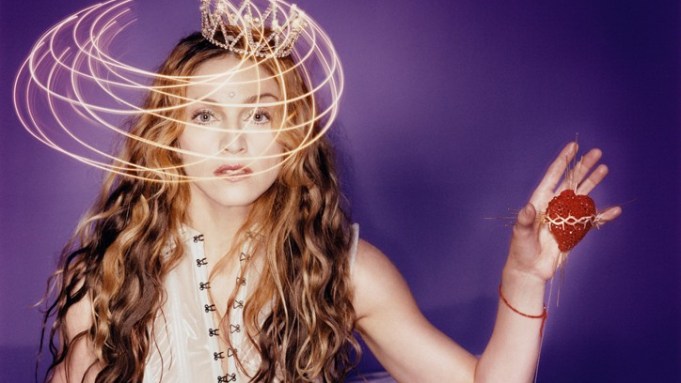 GOING TO LACHAPELLE: Giving the Mona Lisa a run for her money, a portrait of a crowned Madonna clutching a thorny heart is one of some 200 images by wacky snapper David LaChapelle due to be exhibited at the Hôtel de la Monnaie in Paris, Feb. 5 to May 31. A new series of 3-D photo installations by the American also will be unveiled during the show, his biggest ever in France. LaChapelle is expected to attend the opening.

PEACHES GELDOF DRESSES UP: Peaches Geldof already has a magazine column, DJ gigs and a television show for MTV in the U.K. under her belt. So launching a clothing line was the obvious next step for the Brit girl-about-town, who has unveiled a 10-piece capsule collection for the London label PPQ at Selfridges in London, made up of chiffon, velvet and lace dresses with a Gothic edge. “I’ve always been interested in fashion ever since I was a little girl playing dress-up,” said Geldof, who’s now based in Williamsburg in Brooklyn. And, while Geldof said the collaboration came about through her scenester connections — she got to know PPQ designers Percy Parker and Amy Molyneux “while dating a boy signed to their record label, 1234,” — the pieces are also inspired by her social circle’s look, which Geldof said involves “a lot of black, white and lace. The whole collection has a vintage feel to it, as I’m a big vintage buyer,” said Geldof. “I also looked at icons like Siouxsie Sioux and Robert Smith, and took notes from Gothic novels like ‘Dracula’ — the cape came about while I read this.” Geldof said she expects the project to span “at least several seasons,” and her spring collection is in production.

CLAIRE’S CRYSTAL BALL: Not long from now, the “It” bag — and the 4×4 — will be a source of embarrassment, masstige brands will suffer and African style will be all the rage. Those were just a few predictions from Claire Kent, the former Morgan Stanley luxury analyst who is now an industry consultant and a non-executive director of French Connection in London. Kent, speaking at the Luxury Briefing conference in London last week, said with or without the credit crunch, the 15-year boom in luxury goods was never going to last. She pointed to “luxury fatigue” and the growing fear of debt, and said consumers would increasingly be spending more money on fewer items. As a result, “masstige and aspirational brands will suffer the most,” she told the audience, adding that the handbag bubble is bursting now. “An ‘It’ handbag will become an embarrassment — a clear sign that you don’t have your own view of fashion,” she said. Among the trends that will flourish in coming years will be African style. “Barack Obama is bound to create an impact on fashion and style, and we’ll see a shift in emphasis to African culture,” she said.

GUYS AND DOLLS: It took a little longer to come to fruition than originally planned, but a new Balmain men’s collection by its hot designer, Christophe Decarnin, is in view. The French house is expected to unveil Decarnin’s first fully-fledged men’s wear effort in January at a presentation in Paris during men’s fashion week.

NEW MERCHANT ON THE BLOCK: Tom Binns is known for his dramatic, iconic jewelry pieces for the likes of Jeffrey and Henri Bendel, but now the designer is finally getting a home of his own. The first Tom Binns jewelry store is bowing on New York’s Perry Street, possibly before Jan. 1. No word yet on the design or size of the place, only that, like the rest of his collection, it will be anything but regular.

ZILLI SKI STRATEGY: France’s Zilli, which bills itself as one of the world’s most expensive men’s wear labels, is heading for the hills — some of the most exclusive ones, that is. Zilli said it would open its first store in the jet-set ski resort of Courchevel in the French Alps. The 2,150-square-foot unit, which boasts oak fixtures and polished wood floors, is to launch Dec. 10. Skiwear features ostrich, crocodile and peccary skins and furs such as mink, chinchilla and sable. A handmade, down-filled crocodile jacket for 95,000 euros, or $120,000, hits the haute button down to its very last gold stitch. Zilli, which opened its first store in Cannes this month, counts seven fully owned stores and around 30 franchised boutiques. The company’s sales, which reached 70 million euros, or $89 million at current exchange, midway through this year, are expected to exceed the 100 million euro, or $126 million, mark next year.

MODEL CITIZENS: Etam, the 92-year-old French fashion chain, has tapped model Natalia Vodianova as its first campaign muse, with shooting scheduled to begin over the next few days. Rumor has it that model-turned-photographer Astrid Muñoz could be the pretty face behind the camera.


FRAME GAME: Artist Sylvie Fleury, who has created a giant version of a Chanel handbag and a cast metal one for Louis Vuitton, is taking her tongue-in-cheek view on fashion to a new zenith. On Friday, the artist is set to stage a fashion show at Thaddaeus Ropac’s Paris gallery for the launch of her Dom Pérignon Rosé glass, smeared with a lipstick mark. Instead of handbags, the models will tote paintings that later will be hung in the gallery. Following the happening, a film of the show will be screened like a work of art.

RED ALERT: “I’m the real Wonder Woman!” declared legendary Parisian nightclub owner Régine, who joined Marjane Satrapi and Clotilde Courau Thursday night for the European launch of Diane von Furstenberg’s Wonder Woman collection in her Paris flagship. “I’ve known Diane for years, since she was at school. We’re both Capricorns; all Capricorns are Wonder Women,” she said. Not yet ready to hang up her dancing shoes, the senior after-dark diva disclosed she’s been working on a new album, “A Tout de Suite,” or “See You Shortly,” due for release in January. “That’s how I’ve always signed my letters,” she said, disclosing that Boy George is one of many stars to have collaborated on the work. Also in the pipeline are two new scents, dubbed Régine and Zoa by Régine, due out in March.

OVER THE RAINBOW: Hermès beamed a nighttime rainbow over La Place de la Concorde in Paris Thursday during the first Fete de la Couleur, or Festival of Color, to celebrate the International Day of Children’s Rights. Pink and orange lights danced in trees in the Tuileries garden while guests jazzed up outfits with an orange Hermès scarf here or a pink-feathered hat there. Initiated by Hermès, whose Faubourg Saint-Honoré boutique was illuminated pink and orange for the occasion, partners included MAC cosmetics whose makeup artists daubed bold color onto willing partiers. Guest of honor, rising French actress Léa Seydoux, said she’s just wrapped filming Quentin Tarantino’s remake of “Inglourious Bastards” in Berlin, in which she plays a farmer. “The clothes were pretty unattractive,” she said. Seydoux spent part of her childhood in Senegal, where funds raised from the evening’s auction, which included Bettina Rheims photographs of children, will go to UNICEF’s school projects there.