A party was held in her honor on Wednesday night at Darcy and Andy Nussbaum’s Upper East Side apartment. 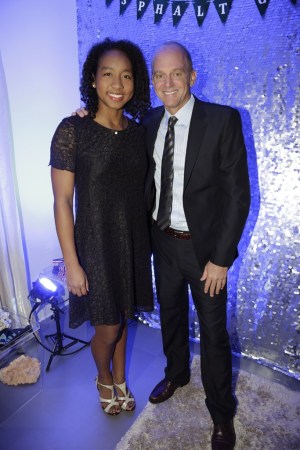 POOL PARTY: Olympic-swimmer-turned-broadcaster Rowdy Gaines helped bronze medalist Lia Neal celebrate her triumphant trip to London at a party Wednesday night at Darcy and Andy Nussbaum’s Upper East Side apartment. While board short-wearing waiters passed caviar-dotted life rings and “Deep End” spiked drinks for over-21 guests, Neal’s fans grabbed kickboards, bathing caps and other props to pose for photos with her. The 17-year-old said the Summer Games weren’t as stressful as she expected. “Everyone said they wouldn’t be as nerve-wracking as the Olympic Trials. But I thought they were just saying that to make me feel better,” Neal said.

Last week the New Yorker didn’t let her training at Asphalt Green interfere with catching Christian Siriano, Herve Leger and a few other fashion shows. Truth be told, she rewarded herself by shopping before and after the Olympics. “I did a lot of shopping at Topshop when we were in London and when we were training in Vichy, France the week before the Olympics,” she said. “What I really liked about fashion week was all the bloggers taking pictures of these outfits that you don’t see everyday. I liked how everyone was free to express their style, knowing it would be OK because it was fashion week.”

Gaines (who will be commentating for NBC’s coverage of the U.S. Nationals in December) said Neal and her team were relaxed as could be. “That ‘Call Me Maybe’ video that they made epitomized what they were like as a team. They were just relaxed and loose,” he said. “Even Michael Phelps was. In 2008, he was probably the most intense athlete. He won eight medals but he didn’t seem to have fun doing it. This time he was the complete opposite.”

While the U.S. swimmers logged between six to 10 miles each day in the months leading up to the Games, Gaines clocked 20 hours on the pool deck during the competition (stealing the occasional air mattress cat nap in the edit room.) “My big thing afterwards was to go home to sleep,” he said.

Maybe it was the table laden with blue candy and blue-frosted mini donuts, but Wednesday night’s guests buzzed around the room. Martha Stewart chatted up Neal, whose parents Siu and Rome looked on proudly, Stephanie Winston Wolkoff and her husband David Wolkoff dropped by and Kate and Andy Spade caught up with friends. The latter is knee-deep with commercials for Target and Warby Parker, and a mobile project for J. Crew. The Spades’ daughter Frances was among the damp-haired Asphalt Green swimmers joining in on the Peter Callahan-catered fun. Asked if she swam, she offered, “A lot.”

As chairman of the board of Asphalt Green and a thrice-a-week swimmer, Andy Nussbaum said youngsters of all abilities and backgrounds are inspired by Neal. “There aren’t a lot of 100 percent happy moments in life. This is one of them,” he said.