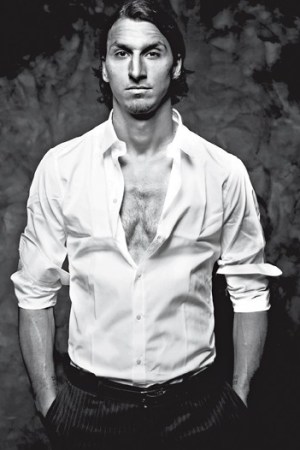 GOOD SPORTS: Domenico Dolce and Stefano Gabbana continue to score in the soccer world. Proving the point was the chock-full cocktail party recently hosted by the designers for A.C. Milan in their men’s store in Milan. Besides celebrating A.C Milan’s 18th national championship, the event feted the book “Milan Fashion Soccer Players Portraits,” filled with black-and-white studio portraits of the players taken by Marco Falcetta, a young photographer found by the duo. “Soccer players have a great relationship with fashion, a strong personal style and care about their bodies. They really represent the male aesthetic and our times,” said Gabbana.

Nearly all the players, including superstar striker Zlatan Ibrahimovic, showed up clad in dapper gray pinstripes. In the 148-page book, it’s the players’ personalities and expressions that talk, their buff bodies clad in anything from crisp white shirts to blazers to sport jackets, obviously suggested by the designers. “We’re used to being photographed on the pitch but this was my first fashion shoot, a different and very enjoyable experience,” said Brazilian striker Robson de Souza, aka Robinho.

The project contributes to Fondazione Milan, a nonprofit organization to promote social wellbeing in depressed areas.

FORMICHETTI GOES RETAIL: Nicola Formichetti, creative director of Thierry Mugler and fashion director for Lady Gaga, will open a pop-up shop in Manhattan this fall as part of the second annual Boffo Building Fashion competition. With the support of the CFDA and sponsor Supima Cotton, Boffo matches architects with fashion designers to build temporary retail installations. The pop-up shops will be located in a 19th-century cast-iron building at 57 Walker Street in TriBeCa, and other participants will include Patrik Ervell, Irene Neuwirth, The Lake & Stars and Ohne Titel. A juried competition to find architects to collaborate with each designer kicked off last week and the first shop will open on Sept. 1. Each architect is awarded $20,000 to realize his or her retail vision.

TALKING HEADS: Alber Elbaz will don a new hat and chair a talk between Israeli artist Michal Rovner and author David Grossman at the Espace Culturel Louis Vuitton in Paris on Thursday. Rovner and Grossman also have collaborated on a children’s book, called “In Your Arms,” to be published by Steidl. Also at the Vuitton cultural space is the exhibition “Michel Rovner, Making of Makom,” which is on show until May 29.