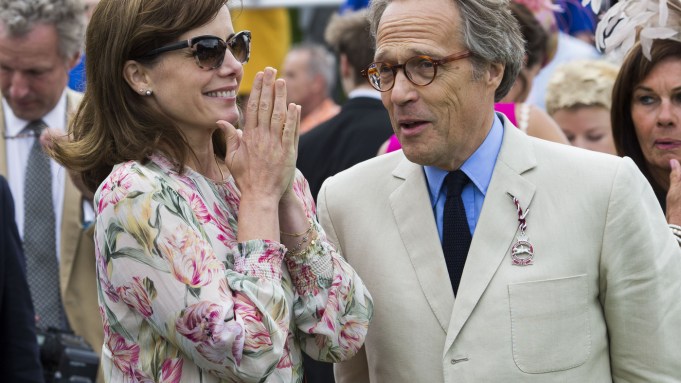 FLOWER POWER: “It’s real silk,” said Shadi Halliwell of her black-and-blue Amanda Wakeley top from the designer’s spring collection. The group creative and marketing director of Harvey Nichols wasn’t talking from the shop floor, but from a grass paddock where she’d just dismounted her horse, Zebedee’s Son, and the top was made for racing.

A few minutes earlier, Halliwell and 11 other female amateur jockeys thundered down the Goodwood course in a five-and-a-half furlong race known as the Magnolia Cup, an annual charity event that takes place during Ladies’ Day at the Qatar Goodwood Festival.

The jockeys — whose day jobs range from banking to millinery — train hard all year ahead of the race, which takes place on the Goodwood estate in West Sussex, England.

The estate, which belongs to the Duke of Richmond’s family, has been hosting horse racing events since the 18th century, and the thoroughbred competitions it hosts at the end of July are a fixture on the British sporting calendar.

“Three days a week of riding and two at the gym. It’s nice to have something difficult to do outside work,” said Halliwell. “It makes work easier to manage.” Racing is has certainly put job stress into perspective. “Today, there were about 30,000 people watching — so stressful.”

Charlotte Hogg, who was decked in a white silk number with thin colored stripes by Me + Em, an online label and favorite of the Duchess of Cambridge, said she spent her spare time doing squats and toughening her core. “I ride, but have never raced before. It’s like learning to ride a bike all over again, with a different saddle and a different position,” said Hogg, who works for the Bank of England.

Other riders wore silks by designers and labels including Liberty, Jasmine Guinness, Bella Freud and Vivienne Westwood. Harrods, meanwhile, sponsored a horse named Conry, which it rebaptized Harrods Hot Hooves for the day.

The Magnolia Cup winner, Isabelle Taylor, wore a Guinness design emblazoned with the number 90 and a crown, in honor of Queen Elizabeth’s birthday year.

This year is the second in a 10-year sponsorship deal by Qatar, and the sixth year of the Magnolia Cup, which has raised upward of 1 million pounds, or $1.3 million, for charity.

On Thursday, Charles Gordon Lennox, the 10th Duke of Richmond, who lives on the estate, was on site handing out awards alongside the retired English ballerina Darcey Bussell.

Beulah, the London dress label founded and designed by Lavinia Brennan and Lady Natasha Rufus Isaacs, created one of the silks, which was covered in a hydrangea hand-block print.

“It’s from our spring collection and reflects the story of the brand and the charity we support,” said Brennan. The prints were made by the women who benefit from the Beulah Trust, a charitable foundation that supports projects that create livelihoods for victims of human trafficking.

While there may have been only one winner of the cup, all 12 jockeys got lucky on Thursday. Soon after their race ended, the skies opened up. The show went on, however, with horses battling their way through a curtain of rain, sadly, not so unusual for an English summer.