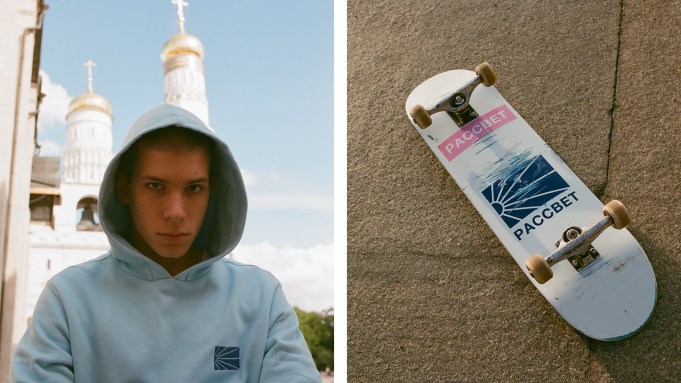 DAWN IN MOSCOW: Hot Russian men’s designer Gosha Rubchinskiy, who has begun incubating labels even younger than his own, plans to introduce a new skate brand.

Called Paccbet and pronounced Rassviet, the Russian word for dawn, it is the brainchild of skateboarder Tolia Titaev and his friends.

Like Rubchinskiy’s collection, it will be produced and distributed by Comme des Garçons. Expect a selection of skateboards, T-shirts, hoodies and caps priced from about $26 to $180.

They are to launch exclusively at Dover Street Market in London, New York and Tokyo, Comme’s Paris Trading Museum and their respective e-shops from Saturday.

Comme des Garçons has a legacy of incubating promising designers, including the likes of Andre Walker and Ganyru. Rubchinskiy is carrying the torch and has already hosted a new collection by his friend Valentin Fufaev under the moniker Doublecheeseburger at Dover Street.

According to Comme des Garçons, “Tolia and Gosha met through the Moscow skate scene. They have evolved side by side in this creative community for over a decade. As the kids grow, the scene grows, and Gosha wants to help give a voice to this new generation.”