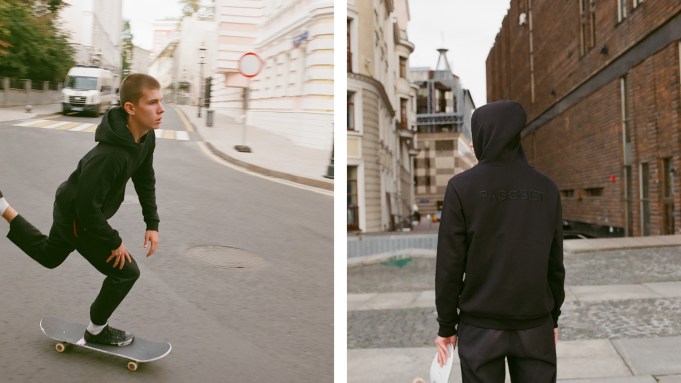 RUSSIAN AROUND: “Gosha, the Russian teacher,” Gosha Rubchinskiy joked about himself as fans, spotting him at Dover Street Market in London, conscripted him to sign their new Paccbet skateboards, T-shirts and caps.

The Russian word for “dawn,” Paccbet is also the name of a new skate brand Rubchinskiy debuted on Saturday along with a video showcasing Moscow’s energetic skateboarding scene, a rich vein of inspiration for the designer.

It’s the second fashion label Rubchinskiy is incubating; this one the brainchild of skateboarder Tolia Titaev and his friends.

Like Rubchinskiy’s collection, Paccbet is produced and distributed by Comme des Garçons. A clutch of youngsters converted on Dover Street in London ahead of the 11 a.m. opening on Saturday to snap up skateboards, T-shirts, hoodies and caps priced from about $26 to $180.

The collection was also available at Dover Street Market in New York and Tokyo, Comme’s Paris Trading Museum and their respective e-shops.

The next step for Paccbet, pronounced Rassviet, is a freestanding store in Moscow slated to open next April, WWD has learned.

“This year, we decided to use our space here like a platform for young talents,” Rubchinskiy explained in an interview. “I have a lot of people around me in Moscow and some interesting kids and we decided to launch different projects.”

The first was a label called Doublecheeseburger by his friend Valentin Fufaev.

“It was successful and now we try to do it again. I had already in mind this project, Paccbet, to do something more about skate and like very basic items like simple T-shirts or sweatshirts,” Rubchinskiy explained.

Titaev, who modeled in Rubchinskiy’s first fashion show eight years ago, “already planned for two years to do his own skate brand and I think it’s a good idea to mix my idea of basics and Tolia’s idea of a Russian skate brand and we decided to do it together,” he added.

The high-energy video by Oleg Kulev, shot over the summer and backed with an exclusive track by Buttechno, shows young skaters trekking their way across Moscow, with its gleaming modern skyscrapers and historic buildings.