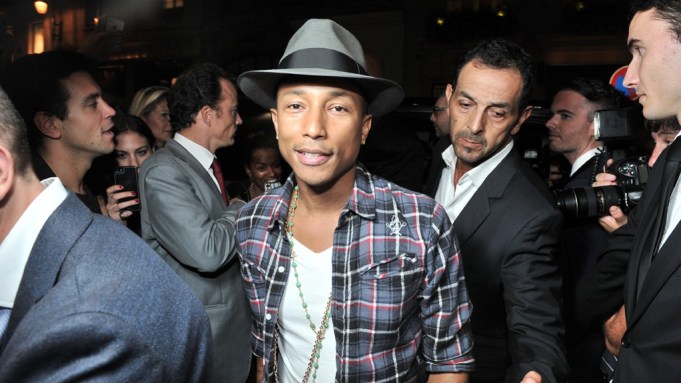 GOTTA WEAR SHADES: As one reporter remarked on the way out, the press conference to launch Moncler’s sunglass collaboration with Pharrell Williams was like a fashion show: It started 45 minutes late and was over in less than 15 minutes.

“Hello, everybody,” Williams called out as he and Moncler chief Remo Ruffini pushed their way through the crowded marbled-clad basement of the brand’s new store on Rue du Faubourg Saint-Honoré. “This is amazing,” Williams marveled. “This is supposed to be a store — I think it’s like a museum out of, like, ‘Tron.’”

Wearing a plaid shirt and rolled up jeans, the hip-hop star explained the sunglasses were made from a single piece of titanium.

“I think functionality is the coolest thing ever. You know, like when you’re in England and like, you know, the person has on, like, Wellies and it’s raining outside, it’s so cool. The color’s cool, but what’s cooler than that is the fact that they’re dressing accordingly,” he said.

That brought him to his biggest fashion no-no, as far as eyewear is concerned. “Probably what I’m doing, wearing them on the inside — that would be number one,” he said. “I feel like when people wear sunglasses and there’s no sun, it’s kind of ridiculous — like myself.”

Williams, who previously worked with Louis Vuitton and Japanese designer Nigo on an eyewear line launched in 2005, hinted a collaboration with Google Glass was next. “I know they’ve asked me about it,” he said. “Maybe there could be a collaboration there — you know, tech.”

No sunglasses were needed at the dimly lit dinner Ruffini hosted later at Castel, where he table-hopped to visit the likes of Clotilde Courau, Coco Brandolini and Delfina Delettrez.