Frida Gianninni, Luke Evans and Brendan Mullane were among revelers. 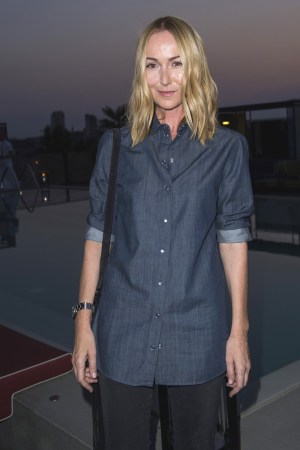 HAIR APPARENT: Luke Evans kept running his fingers through his hair at GQ’s fashion bash in Milan on Saturday night. “It feels so bizarre. I had curly hair all my life, but I had to get it straightened for my next movie,” he said of “High Rise,” a sci-fi drama set in the Seventies, in which he stars opposite Jeremy Irons and Sienna Miller.

“I look like George Best, the footballer, you know? And the pants were a little bit tight back then, everything was on display,” lamented Evans, who will also be seen in “The Hobbit: The Battle of the Five Armies” and “Dracula Untold” this year. He boasted he was perfectly cast for the latter movie. “I’ve got the fangs,” he said, showing off his pointy canine teeth.

Frida Giannini also introduced a new hairstyle. “After 40 you have to cut it, you will feel easy and light,” she laughed, shaking her hair loose for demonstration.

Designers including Gaia Trussardi and Salvatore Ferragamo’s Massimiliano Giornetti shuttled between the GQ event and another party hosted by Details magazine.

Giornetti said he went for a much younger cast for his show this season. “Young guys are crazy about Ferragamo — they want the shoe and the belt. It’s no longer about age, it’s about lifestyle,” he asserted. He noted men’s wear now represents 40 percent of the business, with accessories as the key driver.

Brendan Mullane said he’s been avidly following the World Cup. The creative head of Brioni divulged he was rooting for the Netherlands. “I love football when it’s fast, and [Arjen] Robben is just unstoppable. But I would still love to see an underdog win. Never underestimate teams like Costa Rica or Uruguay,” he said.