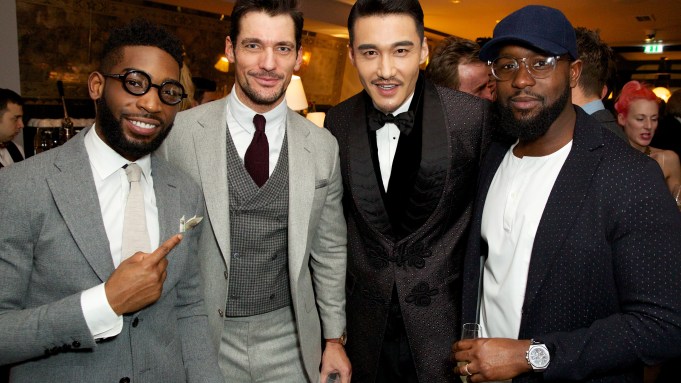 MUSIC MAN: David Bowie was very much the focus of conversation at the British GQ dinner that closed London Collections: Men earlier this week.

GQ editor and LC:M chair Dylan Jones, toasted the late singer during a dinner at the newly refurbished Sartoria on Savile Row. He said in his speech during dinner that both of his teenage daughters woke him at 6:45 a.m. to check if he was alright after the news broke. Bowie was a GQ Man of the Year in 2002.

“There hasn’t been a single person I’ve talked to today whose life hasn’t been affected by Bowie in some way, and whether they’re in their 50s or 60s, or in their teens and 20s, Bowie somehow touched all their lives. I really don’t think that LC:M would have existed if it wasn’t for Bowie. Just look at the way in which his fingerprints are over every designer’s sensibility,” said Jones.

He said he was looking forward to the “occasional spot of lunch” as part of his new role.

David Furnish said he’d had an incredibly busy few days, juggling his commitments to the collections, as well as to his day job as founder of Rocket Pictures, the film production company he set up with Elton John. “And I’ve been trying to fit in the school run too,” he said, referring to his two young sons.

Robert Konjic admitted that he went two weeks without seeing his fashionable three-year-old daughter, Romy, whose mother is Julia Restoin Roitfeld. “I missed her,” he said. “She’s so funny. She hates being called cute. If I say, ‘Oh, buba, you’re so cute,’ she gets so mad. I asked her if she’d rather be an ugly boy, and she said yes.”

According to Konjic, she has always had a strong sense of her own style. And that’s OK by him. “When she’s with me, I let her wear whatever she wants. If she wants to be half-Pippi Longstocking and half-Spider-Man, that’s fine by me; she can be Spider-Pippi if she wants.”

Other guests included Oliver Cheshire, Patrick Cox, Andrew Weitz, Johannes Huebl, Jack Guinness, Marvin and Rochelle Humes, Nick Grimshaw, Stephen Webster and Daisy Lowe, who paused on her way out to do a quick Snapchat for her fans.