Editor in chief Will Welch said the new quarterly magazine will launch in May.

By Paulina Szmydke and Alessandra Turra on January 17, 2016
View Slideshow 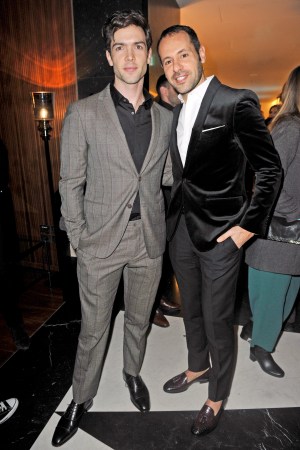 MEN’S CLUB: GQ threw a party in Milan Saturday night to introduce Will Welch, the new editor in chief of the forthcoming GQ Style. “We have an issue coming out in March that’s in the old format and there is a big launch on May 17 — that’s when we go quarterly,” said Welch, noting that while GQ is a general interest magazine, GQ Style would take “a really deep dive into the world of fashion and lifestyle.”

He was confident the magazine would work despite the challenges of print. “It’s a difficult time…but I absolutely think that there is a hungry audience for what we put together,” he said, noting that Millennials would be key.

Cue 29-year-old Ethan Peck. “I have The Economist and the New Scientist on my bedside table — and GQ, of course,” the emerging actor smiled, sporting a brown suit by Ferragamo, a brand that’s been popular recently with Hollywood actors, including Bradley Cooper and Jake Gyllenhaal.

Gregory Peck’s grandson was fresh off a shoot: “If you are familiar with Lee Daniels [who] did ‘The Empire’ — I just wrapped his new pilot for Fox.”

Peck kept mum about the show’s details, saying only that he plays “somewhat of an anti-hero.” If the show gets picked up, it will air in the second half of 2016. His “supernatural thriller” — “The Curse of Seeping Beauty” — is due out this spring.

Peter Dundas made his first outing as a full-fledged men’s wear designer. Describing his debut Roberto Cavalli collection as his “personal wish list,” he noted his friends had similar ideas, which they promptly put into action. “I think there is going to be a fight tomorrow when they discover how much is missing from the racks,” he worried.

Neil Barrett talked about the inspiration for his fall proposal. “I was thinking about my wardrobe as a kid. I had my little quilted anorak, kind of ‘South Park’-y; sleeveless V-necks, a little chunky, and I was caught in an orchard because I was wearing my yellow sweater while stealing apples. I can advise never to wear color when you do something which is incorrect or illegal,” he said.

Brendan Mullane said it was his bedside literature that gave him the idea for his new show, which would “see the alter ego of the Brioni man.” “I’ve been reading a lot of books about the work of artists like James Turrell, and also [Martin] Kippenberger — who they socialized with, what their actual life was outside of work and how it translated or not into their art,” he mused.

Brian Atwood noted his appetite for designing men’s shoes has been growing lately. Will he launch his own men’s line? “We’re in discussions about this,” he said, nodding his head.