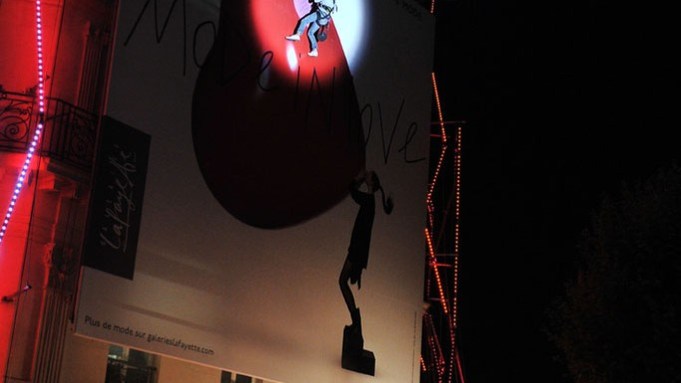 TAG TEAM: French graffiti artist André Saraiva abseiled down the facade of the Galeries Lafayette flagship in Paris on Tuesday evening and tagged his Monsieur A character on a billboard — but it was all a stunt orchestrated by the department store to mark the kickoff of Paris Fashion Week.

Dangling from a rope, Saraiva spray-painted large pink faces on an advertising campaign image by Jean-Paul Goude, while British band Citizens! performed a live set just below him on a ledge overlooking the store’s main entrance.

“It was a lot of fun. We felt like U2 in the video for ‘Where The Streets Have No Name,'” lead singer Tom Burke said at a cocktail inside the store afterward. Burke, who appeared in the spring advertising campaign for Saint Laurent menswear, said the band was recording its second album, due out next spring.

Goude was gracious about having his work defaced. “He did his little thing, like they do in the subway, but it’s very well done, with incredible mastery. He has a lot of nerve,” said Goude. “What would be good is to sell it at Sotheby’s and split the proceeds 50/50.”

Saraiva said that when he started out more than 20 years ago, he never could have imagined that a department store would pay him to paint its exterior. “But I would have done it anyway — illegally,” he said with a mischievous grin.