Last week was a sort of topping off ceremony for the newly-installed urban decor in the expanded Cusp department at Neiman Marcus NorthPark Center. 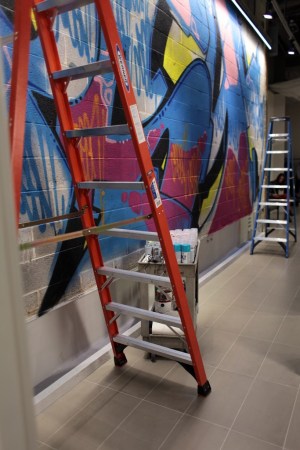 HAS PHOTO ON THE CUSP: Last week was a sort of topping off ceremony for the newly-installed urban decor in the expanded Cusp department at Neiman Marcus NorthPark Center. The retailer hired graffiti artist Richie Mirando, a.k.a. “Seen,” to practice his craft on two expansive concrete-block walls along the fitting-room areas. Only the top edges of the murals, which were created on three nights, are visible from the sales floor.

“The floor is based on a sense of discovery, and these walls are designed to be the crown jewel,” said Ignaz Gorschek, vice president of store development. “The only direction we gave him was we didn’t want anything vulgar or too aggressive.”

That was perfect for Mirando, a self-taught native of the Bronx, New York, who began spray painting subway cars at age 11 and was exhibited within eight years in European galleries.

“I don’t normally do projects like this because most of the time they are controlled by 12 different people in the art department and everybody wants to put their input in,” he said. “The beauty of this was they said I had total freedom.”

Mirando worked old-school style, spray painting swathes of color shaded with black contours and squiggles. On one wall he composed “Seen” in abstract hot pink bubble letters — a signature motif that was originally designed for speed — “to get from train to train to train quickly,” he explained.

While he’s been categorized as a street artist, Mirando noted that he paints all day every day, usually with oils on canvas, at his studio in Las Vegas.