Grammys 2019 Fashion Review: Cardi B on the Half Shell, Michelle Obama on Stage 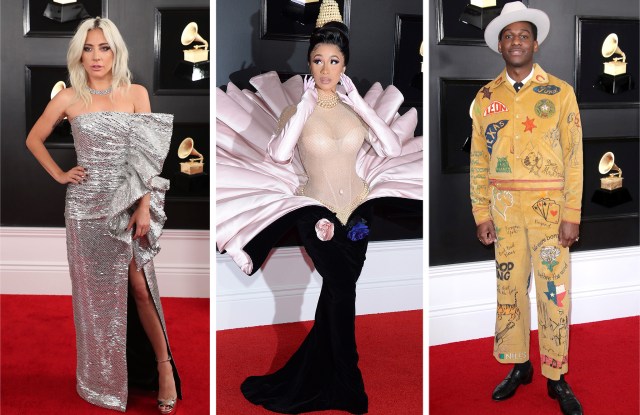 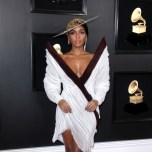 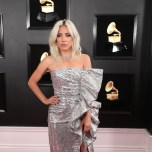 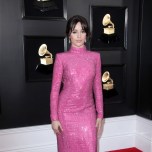 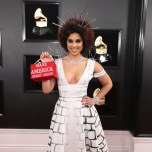 Even Lady Gaga, who famously arrived at the 2011 Grammys in an Armani egg pod, played it relatively safe (she’s a movie star now, after all), wearing a silver, side-ruffle gown by Hedi Slimane for Celine (a no-brainer given that she attended his first women’s ready-to-wear show last October).

Long gone were the nearly nude looks of years past; instead of baring her naval in daring green Versace circa 2000, Jennifer Lopez went with a modest, crystal-embellished mint green Ralph and Russo column gown, and covered her face with a wide-brim hat; Miley Cyrus worked an oversized circa 2019 Mugler suit with a side of cleavage, and, as WWD reported, H.E.R. was outfitted in a custom Coach purple jacquard jumpsuit.

Aside from Joy Villa and Ricky Rebel’s pro-Trump get-ups, political fashion statements were at a minimum compared to last year’s white roses and all-white outfits to show solidarity with the Time’s Up movement. Instead, the girl power was reflected in the 31 female winners, and the show of female force on stage, where Alicia Keys hosted, and Diana Ross, St. Vincent, Gaga, Lopez and more gave compelling performances.

Former First Lady Michelle Obama made a surprise appearance – she could have turned up onstage in a paper bag and gotten a standing ovation; but wore a green sequined suit by New York-based Sachin and Babi instead.

“It’s a dream come true,” said the designers Sachin and Babi Ahluwalia, who worked with stylist Meredith Koop to create the custom look. “We originally discussed a printed silk pant suit and then suggested a few other glamorous versions of it. We thought the deep loden green sequined version would be ideal and Meredith was a dream to work with as she was open to our creative suggestions and it worked!”

Power pink was a color trend. Exhibit A: Camila Cabello’s Armani Prive pink crystal column gown. The 21-year-old participated in the RAD initiative started by costume designer Arianne Phillips, which asks fashion brands dressing stars for the red carpet to donate to charity, in Cabello’s case Save the Children. (But instead of mentioning it during her red-carpet interview with Ryan Seacrest, she promoted her new Mastercard commercial – which clearly pays the bills.)

Although Childish Gambino picked up Best Song and Record of the year, he was a no-show, and the show of men’s fashion was also somewhat muted. Pusha T, who was feted by Dior’s Kim Jones on Friday night in L.A., wore a Thom Browne black dinner jacket with crystal-edge lapels, and Leon Bridges, who first made an impression on the fashion crowd while performing at Tom Ford’s fall 2016 show, looked cool in a Senior Cords suit with hand-drawn motifs by CFDA Vogue Fashion Fund finalist Bode.

Several luxury brands typically on the Grammys red carpet mix skipped out on dressing nominees (Moschino, Gucci), and others seemed to shift focus to the BAFTAs in London, also on Sunday night, where Cate Blanchett debuted a new dark brown hair color and subversive-looking Christopher Kane dress, and Lily Collins (in Givenchy) and Margot Robbie (in Chanel) wore fresh-off-the-runway couture. Maybe they are saving the best for last – the Oscars are coming up Feb. 24.