The French brand enlisted Casta to art direct and star in a short film about Parisian style. 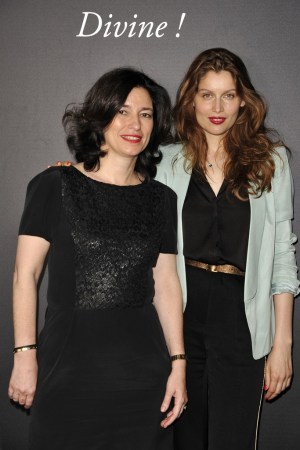 DIVINE INSPIRATION: Not content with casting Laetitia Casta in its fall campaign, Gérard Darel asked the model and actress to art direct and appear in a short film celebrating Parisian style.

The French brand threw a bash at Club Silencio on Tuesday night to celebrate the premiere of “Divine! La Parisienne incarnée par Laetitia Casta.” Guests including Ellen Von Unwerth sipped on Champagne and a Cointreau-and-gin “Divine” cocktail created specially for the occasion.

The film, shot by up-and-coming director Apollo Thomas, was shown in the club’s private screening room. It features black-and-white images of Casta in the streets of Paris, spliced with sensual colored shots of her getting intimate with bearded model Paraskevas Boubourakas — all to a throbbing soundtrack by Blood Orange.

“I think she really has all the elegance and beauty of a Frenchwoman, so it was love at first sight,” Romestain said.

Casta noted there was a difference between a Frenchwoman and a “Parisienne” — the type of woman celebrated in the short film.

“French women have something quite maternal about them. At the same time, French women have a side that is both sensual and free. They are strong women, women of character. The Parisian woman is an intellectual who is open to culture, yet very much in touch with her feminine, seductive side,” she said.

Von Unwerth said she first shot Casta when the model was just 14. “She’s a real movie star — she’s not a model. She has a quality of Sophia Loren, you know, she has that body, which is so amazing and feminine,” the photographer said.