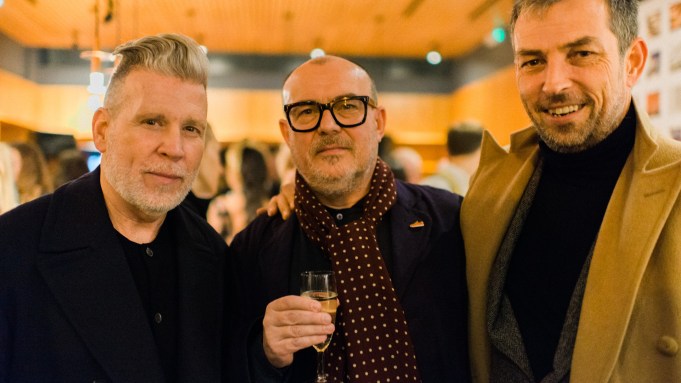 CROSS-DRESSING: The British shoe label Grenson marked the launch of its collaboration with New Balance in London, unveiling a tan brogue-sneaker hybrid that’s part of the British label’s 150th-anniversary celebrations. Made in a limited-edition run of 800, the initial online drop sold out in seven minutes on Friday.

“I love sneakers, I think they’re wonderful,” said Grenson owner and creative director Tim Little, “but the thing that’s changing is that people who once just wore traditional shoes like ours now feel they can do a bit of both.”

The factories that worked on the project were on opposite sides of England — Grenson in Northamptonshire, and New Balance in Cumbria — and the shoes made multiple trips back and forth before they were finished.

The Italian calf’s leather was polished by Grenson and cut by New Balance to its 576 sneaker pattern. Grenson later punched in the brogue details before sending everything back to Cumbria to be put together.

The shoes, which retail for 300 pounds, or $435, are available online, in Grenson’s U.K. stores and at Kith in New York. They will also be stocked at Grenson’s new New York store on Elizabeth Street when it opens on Thursday.