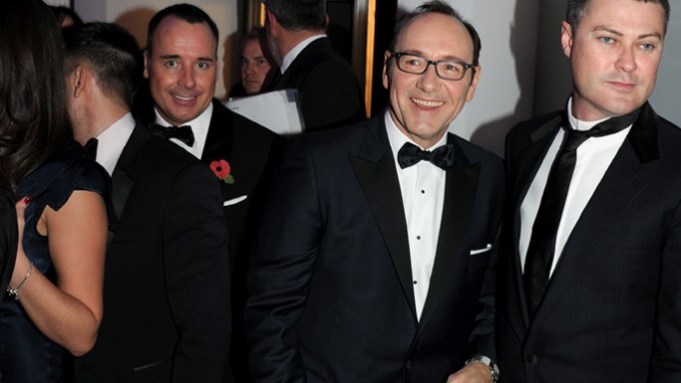 SEEING GREY: Kevin Spacey has played a lot of roles in his time, but there are some he still finds daunting.

“They’ve asked me to replace Elton, but you can’t replace Elton,” said Spacey who had to swoop in at the last minute as host of the sixth annual Grey Goose Winter Ball on Saturday night.

The evening, which raises money for the Elton John AIDS Foundation, is usually hosted by the musician himself. Instead, John was in Perth, Australia covering for George Michael, who had fallen ill before a performance at the new opera house.

Dressed in a Gieves & Hawkes suit, Spacey channeled John, donning an oversized pair of heart-shaped sunglasses as he took the stage at London’s Battersea Power Station, which had a French Riviera — circa the 1950s — feel.

“This circle of replacements has left me with sort of a quandary,” said Spacey.

“Elton John replacing George Michael is one thing. But my replacing Elton John is an entirely different thing. And I’m sorry, I now have to announce who is going to replace me…”

Spacey went on to entertain guests — who included Gareth Pugh, Giles Deacon, Julien Macdonald, and Elizabeth Hurley — with his impersonations of figures including Bill Clinton and Morgan Freeman.

He also did his very best to ramp up the bidding during the auction, which raised over $1 million for the foundation. Ellen von Unwerth’s portable cocktail bar drew the highest bid of the evening at $79,335.

The highest single donation was $158,780 from Tamara Ecclestone.

Deacon was wearing head-to-toe Louis Vuitton and pink Uniqlo socks. “I’m looking forward to getting some serious money made and to raise awareness for such an important cause,” he said.